When “The Iconfactory” launched back in 1996 it was a repository for icon packs as well as a developer of software for creating and using icons. Since the launch of the iPhone, they’ve been responsible for the creation of two great iPhone applications, Frenzic which costs 3 bucks, a fast-paced puzzle game and Twitteriffic 4 bucks for the full version or free for the light version. Twitteriffic is one of the original premium Twitter clients available on the iTunes App Store.

Iconfactory’s latest game, Ramp Champ takes the concept of an arcade game of skee ball and shrinks it down to the iPhone. The application features the same highly stylized, well illustrated graphical work seen in all the other Iconfactory products. Included in this first release of Ramp Champ are four different virtual skee ball games. Clown Town with a carnival theme, Breakwater Bay which is underwater, Space Swarm a skee ball version of Space Invaders, and Icon Garden which is a tip of the hat to Iconfactory’s own roots in icon design.

The game controls are simple and share the same compelling gameplay as games like Paper Toss. By simply flicking your finger upward from the bottom of the screen, you roll a ball toward your target. Depending on how fast you flick, and which direction you swipe your finger controls the power and aim of your shots. Like any skee ball player knows, each of the targets award different amounts of points, and after rolling all your balls the game dispenses virtual carnival tickets that you use to buy virtual prizes.

If you’ve ever been to an arcades or carnival, you probably have fond memories of dumping quarters in to skee ball machines, filling your pockets with tickets, and then claiming some completely worthless prize from the counter. As the former owner of several of those terribly useless trinkets I can say that Ramp Champ provides a perfect amount of nostalgia, and plays into the fun that you got by going to the arcade. Fun game play, wasting time, trying to hone your skills to win more junk. There’s more to the game though than just racking up more and more points. If you click on the “Goals” button you see that each of the four games included also have their own sub-set of goals for different game play and extending the experience.

As an example, The Icon Garden game has progressively harder goals like plant all the pixel flowers, or tip over the canine bovine, or score over 13,000 points. Planting the pixel flowers is as simple as hitting every target. The canine bovine is all about knocking down Clarus the Dogcow as many times as you can, and scoring over 13,000 is pretty self-explanatory score a bunch of points. Completing all the goals requires a fairly high amount of precision, and in the few days of playing with the game I’ve been unable to complete more than a couple of them. The thing is though, Ramp Champ has kept me coming back for more. Most of the goals seem simple at first. You find yourself saying how hard can it be to hit 6 things with 10 balls?, but the games end up being much more difficult than they appear, which is part of the appeal.

In addition to game play Iconfactory has integrated a social networking aspect to the game. You can link directly to Twitter and Facebook to boast about how good you are and what your high score was.

The game is beautifully designed and the over all look is really nice. Iconfactory has done a fabulous job, with game play, and the integration of in-game purchases without being obnoxious about it. I recommend picking up Ramp Champ. It’s fun, and well worth the money spent. I can see this being fun and entertaining for quite some time 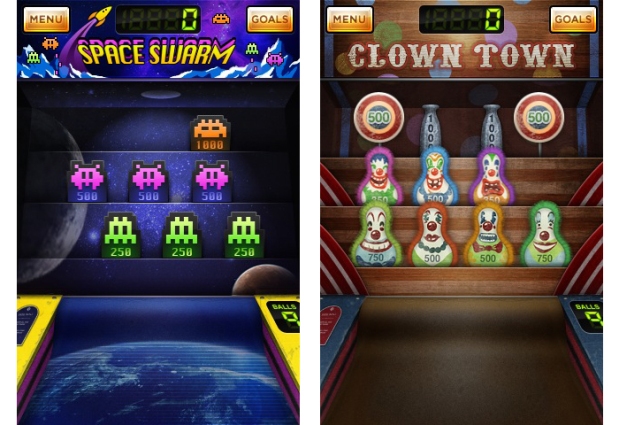