Marimekko is about to celebrate its 60th birthday and the company’s design direction feels as young as it did when it first took modern textile design by storm in the early 1960s. This Legendary Finnish brand continues to produce new and original designs, yet everything they make still feels true to the original Marimekko design ethic.

“Marimekko’s vision is to be the most acclaimed print designer in the world and one of the most appealing design-based consumer brands. The company’s objective is to grow and succeed in the international arena as a Finnish design company that has a strong design identity.”

Because of the adherence to these principles, they are able to court designers who fit so well into their graphic mold and help keep the company fresh and relevant.

1951. The company designs, manufactures and markets high-quality clothing, interior decoration textiles, bags and other accessories under the Marimekko brand. They began as Printex, a company that produced Oilcloth which Viljo Ratia bought in 1949. His wife, Armi Ratia, commissioned young artists to design fabric prints for the company, which resulted in entirely new, boldly coloured and patterned fabrics. People admired them, but did not really know what use they could have. So it was decided to make a small collection of clothing to demonstrate the uses of the fabrics, and to establish a separate company – Marimekko Oy – to make the clothing. The first Marimekko collection was designed by Riitta Immonen and was presented to the Finnish public in a fashion show at the Kalastajatorppa restaurant in Helsinki in May 1951.

In the 1960s, Marimekko’s business operations rapidly expanded and became international. The product range widened, and Marimekko became a globally recognised phenomenon and lifestyle. Towards the end of the decade, the company ran into financial difficulties, which were resolved through extensive restructuring carried out in 1968–1971.

In 1979 Armi Ratia andin the decade that followed, there was a level of uncertainty and upheaval at Marimekko. At the beginning of the 1980s, the company’s business still flourished. In early 1985, Marimekko was sold to Amer Group Ltd, and the end of the decade saw the beginning of difficult years for Marimekko. The company’s financial situation deteriorated rapidly, and the public image of the Marimekko brand became blurred.

Marimekko began to flourish anew in the 1990s after it was bought from Amer Group by Workidea, a company owned by Kirsti Paakkanen. Marimekko had a charismatic face again, and the company entered a period of strong, profitable growth. Design was once again given center stage, and new lines of products, such as businesswear designed by Ritva Falla, were introduced. Other designers who joined Marimekko’s designer team in the 1990s were Erja Hirvi, Jaana Parkkila, Mika Piirainen, Jukka Rintala and Marjaana Virta.

As the 21st century has rolled in, Marimekko has continued its steady growth. The company’s position in international markets has strengthened substantially through, among other things, the numerous Marimekko concept stores established by retailers. Several extensive Marimekko exhibitions organised around the world have also contributed to increases in exports and the recognition of the quality of Marimekko design. In addition Marimekko’s design team has been supplemented by several new, young talents, including Anna Danielsson, Samu-Jussi Koski, Maija Louekari, and Teresa Moorhouse. Such top names as Björn Dahlström, Harri Koskinen and Ilkka Suppanen have also made their debut as Marimekko designers in this decade.

Maija Louekari was added to the design stable after winning a Marimekko-sponsored design competition in 2003, she’s designed many prints and textiles for the brand. Her latest work is emblazoned on a new line of tableware called In Good Company: Oiva.

The design styling and line work has a retro feel to it that is similar to so much of the illustration work that was produced in the early to mid 70’s. Heavy line work that feels as though it was drawn with a technical pen, and heavy washes of primary color that floats behind it. Yet each of the pieces feels new and fresh, and thankfully a step away from the over used and copied sketchy notebook look that has dominated so much illustration work in the last 5 years. 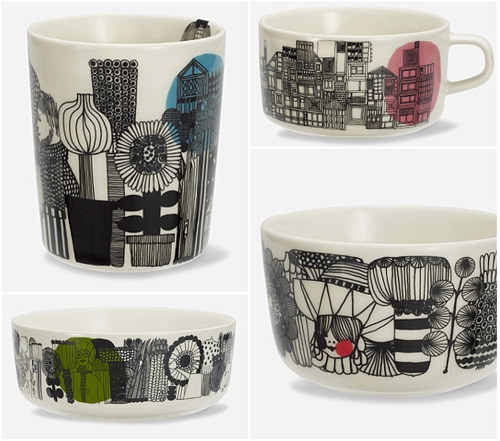 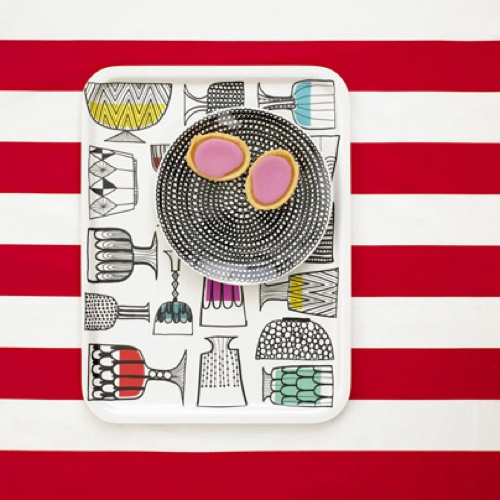 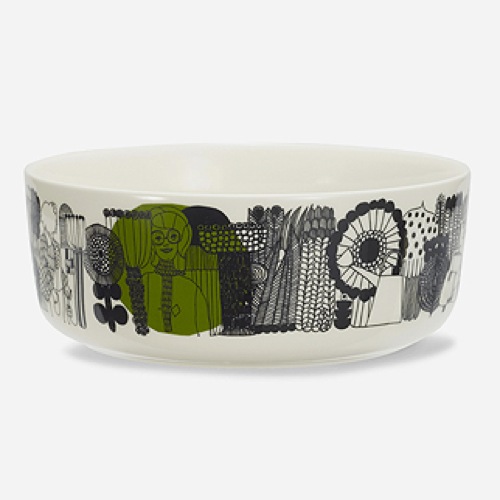 “Marimekko represents the highest standard in artistic and technical expertise with the courage to create something new and unique.”