Like Pepsi’s Refresh Project, Coke is venturing into the viral marketing and social media space for advertising to a younger audience that is less connected to traditional media sources, and more in tune to spaces like YouTube. 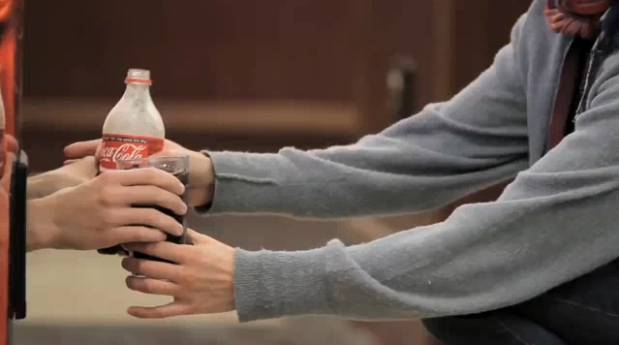 Coke’s new “Happiness Machine” video is their first globally distributed video produced exclusively for a viral marketing campaign.  The video has racked up more than 740,000 unique views since launching on YouTube on January 12th.  Developed and produced by Definition 6 from Atlanta, the video ties directly into Coke’s global “Open Happiness” campaign, and to this point has not been used in any TV advertising. The distribution and marketing of the video has been limited to a global Tweet and Facebook page announcement with hooks directly back to the YouTube video.

“The video was conceived as a way to connect with teens and young adults outside of TV ads and online games. We wanted to give them something that would spread a bit of happiness and something they could pass on to their friends to keep the happiness flowing.”. A.J. Brustein, Global Senior Brand Manager at Coca-Cola,

What makes this video significant to the industry – is that it marks the brand giant’s first global viral effort.  While some regional Coca-Cola markets have produced videos intended for viral distribution (A specific Spanish language Christmas video produced for Mexico), this is the Coke’s first global attempt at a purely viral, digital campaign – without the support of high-penetration TV, and support media.

Coke’s hope is that this first viral effort will be deemed successful enough to lead to more viral campaigns in the future.  In addition the hope is that it will also serve as a case study for the brand and subsidiary brands for an industry that is already looking to digital efforts to deliver against targeted objectives where Television advertising, and its often distracted audience, tends to fall short.

“A Coca-Cola vending machine is transformed into a happiness machine delivering “doses” of happiness. Where will happiness strike next?”