69 years ago yesterday, the end of WWII began with the Normandy Invasion by allied forces. To commemorate the event, BBC Channel 4 launched an immersive online event that chronicled the 24 hour period minute by minute. The result is an impressive blend of vintage news and history, coupled to dynamic technologies that bring the history alive. For a generation of people that are removed from the Second World War, this integrated television/website/social media program brings the history alive with a new vitality.

“D-Day: As it Happens” told the story of The Normandy Invasion through the perspectives of seven people who were there in 1944. Those individuals include a nurse, a paratrooper and a military cameraman, and infantrymen. 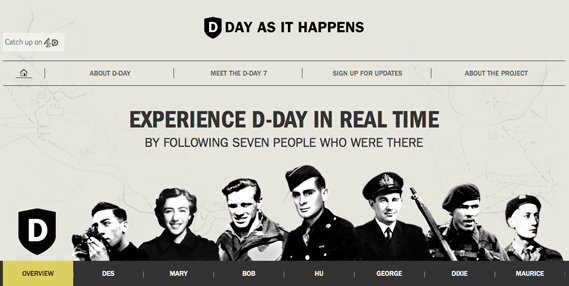 To kick off the event BBC 4 ran an hour long show on June 5 which introduced the back stories of each character. The following day there was a follow up program that recapped the events that took place on June 6, 1944. Between the timing of the first program and the follow up, internet users could track progress in real time through a breaking news-style website created by Digit and by following individual Twitter feeds set up for each of the “D-Day 7”.

The website and TV shows used newly found and previously unseen material collected over a 15 year period by D-Day researcher Colin Henderson. Henderson’s radio reports, film, photographs and records allowed Digit to create maps plotting each of the D-Day 7’s locations throughout the day and develop a 24-hour live feed displaying their reactions, that connected to photographs and video footage of the invasion. Over the 24 hour period of time, more than 1,000 updates were posted to the site with the written accounts taken from historical records including diaries and interviews.

“The idea was to take yesterday’s news and tell it through today’s technology. If D-Day happened now, there would be rolling coverage, live feeds and constant Twitter updates. By using the web and social media, we managed to create something that had people engrossed in the characters and their stories,”

I hate wires. Specifically I hate coaxial cable, HDMI cords, speaker cables, and power cords. So, every time I find a wireless speaker system that promises to deliver superior sound quality and looks good too, I get a bit excited. 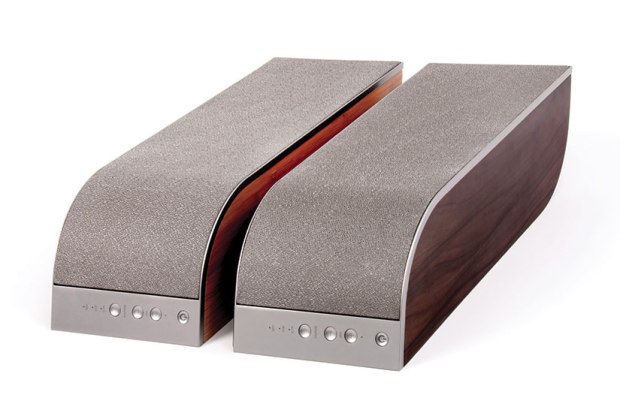 Wren Sound Systems Mike Giffin, (Former Harman International Senior VP) along with a team of other industry veterans worked with product design and brand innovation firm, Ashcraft Design out of LA to develop the Wren V5AP. The system works with iOS, and Android devices to deliver room filling audio via WiFi in a stylish refined package.

The Wren system is designed to reduce or eliminate resonance and coloration through a unique body design. Rosewood or bamboo veneers cover a half-inch laminated MDF board which sits on top of a 4mm low durometer silicone pad that stabilizes the chassis and absorbs cabinet vibration.  The face is wrapped in a unique internal diamond-matrix grille designed to protect the drivers without distorting the sound. 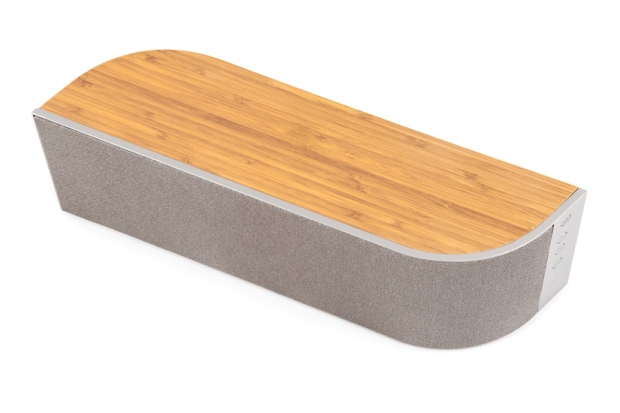 The system has a great look with simple understated controls. It’s the kind of speaker system you don’t mind having out in a room because it looks so nice. At $399.00 it isn’t cheap, but it is on par with other systems like those from Bowers and Wilkens, and it’s far cheaper than Bang & Olufsen.

I love it when a TV spot transcends the typical and actually tells a good story in 30 seconds. Produced by adam&eveDDB, and directed by Blink’s Dougal Wilson, this spot is a follow up to last years The Long Wait commercial for John Lewis. Set to a cover of Frankie Goes to Hollywood’s “The Power of Love” by Gabrielle Aplin the spot tells the story of a snowman’s journey leading up to Christmas morning.
The spot opens in a snow-covered garden, where two children are making a snowman and snowwoman. The following morning the snowman has mysteriously disappeared. From here the audience is transported to a magical world, where you follow the snowman on his  journey through the forest, across rivers, mountains, and into the city. As the story unfolds, the motive for the snowman’s adventure isn’t revealed until the last scene, when we see his return to the garden on Christmas morning.Like last years spot, this works for me because it is less about trying to sell me something, and more about a well made wonderful, sweet little story that I can simply appreciate.

This is my Monday morning Kickstarter find, and something I am probably going to back. Hiku has been getting press lately from some heavy hitters like “AllThingsD” and “Fast Company’s Co.Design” with good reason. Good design is about solving problems with an intelligent, attractive solution that seamlessly blends with your life. Hiku does that.

The simple device is a wireless enable reminder service that is tied to your smartphone. It was created to help your shopping by sending reminders of items you’re out of to your phone. It uses both voice activation, or a scanner and connects directly to your Wi-Fi network at home.That way your phone doesn’t need to be with you to use it.

The device is small, simple, unobtrusive, and elegant, and it solves a problem. All the things good design should be. 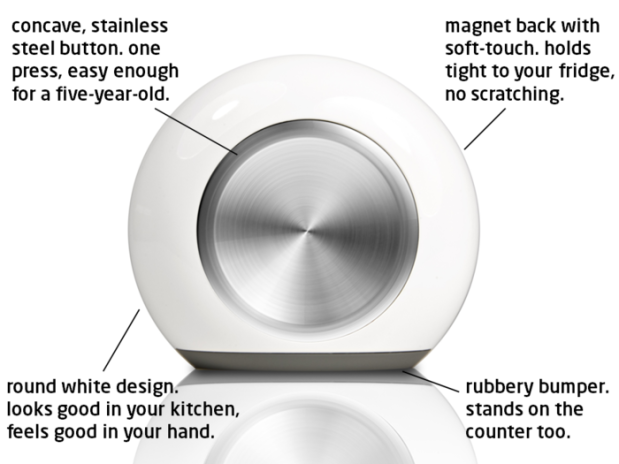