Over the last year, “Flat Design” has become the big buzz word being dropped by, and embraced by everyone. The flat look is nothing new, it just seems fresh in a sea of over played sketchbooky, hand drawn looks that have proliferated for so long. When flat is done right, it doesn’t feel that flat. The video below from Gonzalo Menevichian for Planeta Pop for The Glitz* channel are a great example. These fun little spots have plenty of graphic impact, balanced with solid 2D animation and feel that still feels analog without relying on a design style that has been played out.

This is a pretty interesting social experiment / advertisement wrapped up as an art installation. In October 2013 at the Museum of Contemporary Art in Buenos Aires Argentina, Beldent set up multiple sets of identical twins and then asked participants answers questions asked about them. The art installation is set as a social experiment, and the questions are aimed squarely at what divides the two twins in terms of personality. The only difference between the two is that one of the twins is chewing gum.

Ad or not the results are pretty interesting. MOre than 70% of the participants favored the gum chewing twin. The video on YouTube has had about 110,000 views in the last week and a half. If it goes viral, this is going to be huge for Beldent. Why? Because it superficially proves, chewing gum makes you appear cool.

One of the things that has the biggest impact on me when looking at a logo or visual identity, is not only the iconic originality of the design, but it’s ability to adapt to many situations of use.

Over the weekend I came across an article at Grafitat talking about the logo design for Argentina’s bicentennial celebration this year. The logo, created by imagenHB was designed to be unifying, and highly adaptable for the provincial regions of the country. When you look at all the iterations of the logo, you immediately see just how successful this system really is.

imagenHB had a very tough task ahead of them when they took this project on. In this time when Latin American governments are very concerned with their political message and overall image, they need a brand message that amplifies the message of unity, optimism and new ideals. This is especially true with Argentina, which in the last 40 years has faced strong political and economic upheaval. The celebration of Argentina’s bicentennial (which coincides with that of other South American countries such as Ecuador) is a clear example of an  implementation that represents the ideals of government Argentina, which in the words of President Kirchner boils down to “rethink as a country, and look forward to the future.”

The imagen proposal led by Hernán Berdichevsky and Gustavo Stecher with Juan Pablo Tredicce, chose a universal symbol that identifies the national celebration, and had the ability to adapt to the festivities of each province without losing its distinctive feature. Starting with the shape of a celebratory ribbon and rondel, the universal logo was distilled down a simple chromatic color pallet which represents the values and colors of the whole country. The Sun is the centrepiece illuminating every corner, every city and the people of Argentina. The provincial logos take the same base logo and redefine it using unique colors and images that are reflective of that provinces culture. This allows the identity more flexible and personal, without losing its distinctive form.

“A sun that illuminates every corner, every city and every people of our country. A flower that grows in every one of us. Argentine Bicentenary, Sol de Mayo “. imagenHB

In the images below you can see how imagenHB’s well thought out style guide and brand rules helped to shape the way this logo and identity system was implemented on a national level. It is that attention to detail, and the agencies intimate knowledge of the subject matter that helped to make the system a success. 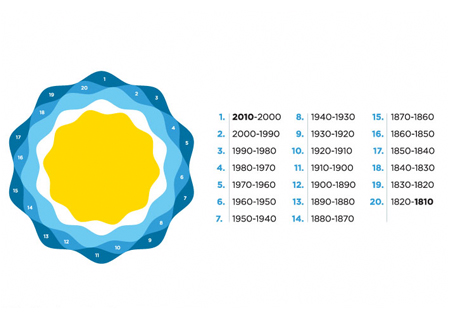 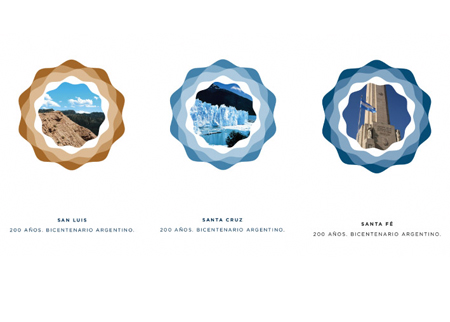 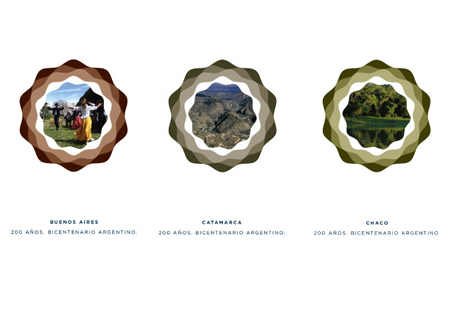