If MINI ever builds this I’m all in. As a former MINI owner and a huge fan of the brand, I have to say I’ve been a bit disappointed with the model line as of late. The MINI got larger, the line fractured into so many models, all of which are really working, and things have just seemed a bit flat.

Leave it to a bunch of interns and their instructors at BMW’s plants in Munich and Dingolfing to come up with something that really kicks some serious MINI butt. The thing is though this is a one-off  and might not ever see the light of day. Based on an All 4 Cooper S Paceman the team removed the back end and replaced it with a truck bed creating a rocking little MINI Truck. (Remember the Chevy Luv?) fitted with heavy duty off road tires a spare on the roof, rally lights, and what looks like a rugged interior, raised ground clearance, and painted up in “Jungle Green” metallic paint, this is a winner to me.

I really hope this goes from an intern project to an actual vehicle. This is the kind of thing MINI needs to bring the excitement back. 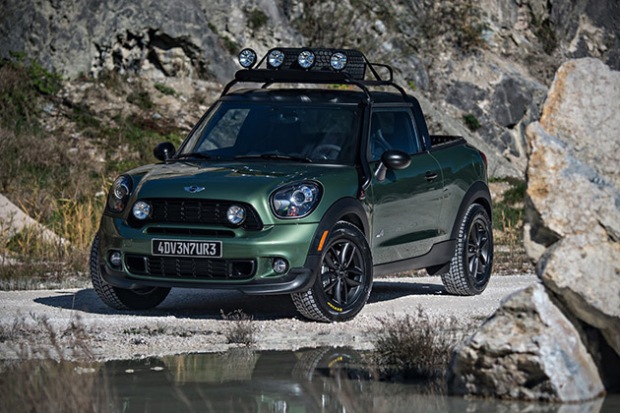 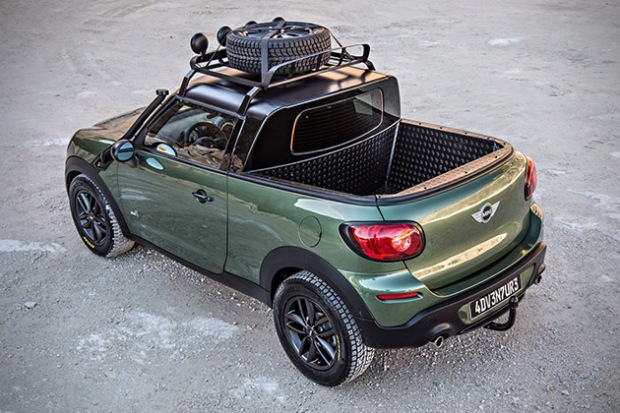 If you happen to be in North Carolina any time between October 12, 2013–January 20, 2014, you might wan to take some time and go to Porsche by Design: Seducing Speed at the North Carolina Museum of Art.

The exhibit will feature more than 20 Porsche automobiles from the collections of or owned by Ralph Lauren, Steve McQueen, and Janis Joplin. In addition they are displaying a one-of-a-kind Panamericana concept, and the 1989 16 cylinder 917 Spyder Prototype; which like the Panamericana is on loan fromt he Porsche museum in Stuttgart, Germany.

In the world of American cars, I’ve never understood why so many models are only offered as a sedan, and not as a coupe. I have nothing against four door cars, I simply prefer the look and slightly smaller size of the two door model. Part of this probably stems from the fact that when I was growing up, four doors cars were driven by my “uncool” parents, or my grandparents. Perhaps that stigma has held with me in some subconscious form. Then again, it might just be my design aesthetic coming in to play.

There are four American cars I would have purchased if they had been available as a coupe. Two of them are available in Europe as two door coupes already. The Ford Focus hatchback, and the new Dodge Dart, which Alfa Romeo sells as the Giulietta in both a two door coupe, and as a hot two door hatchback. The other two vehicles I would have jumped on if they were available as two door models are the Chevy Volt, and the Chrysler 200.

All four of these cars look good as four door models, with improved styling that can compete with European, and Japanese cars. This applies to both interior and exterior styling. Having driven each one of these models, I’d also say that build quality, amenities, and materials rival their foreign counterparts as well. After decades of poorly design, poorly styled and subpar materials, the American car companies (especially Ford and Chrysler. Chevy your design department needs to step up) are making a comeback.

A fifth car that I would consider is the new Lincoln Mk Z, although I hate the grill styling. The folks at Lincoln should have stuck with the 1960’s grill style they were using about ten years ago. It looked better, and it stood out from the crowd. None the less, this is another Ford product that would look stunning with the lines of a two door coupe, instead of a four door sedan.

All of these models need to look at Cadillac and what they did with XTS sedan and the CTS coupe. This is a great example of the same basic model available in two styles, and yes I’d buy a CTS coupe. I think it looks as good as any European, or Japanese luxury car on the market today.

When you think of the British car company MG, most people think of classic sports cars like the MG B, MG midget, or more recently the TF which was introduced in the early 2000’s. the reality is that MG designed and built a full range of sedans and mid sized cars. As always, MG cars were beautiful examples of automotive design, and innovation. Like many British cars built by MG they were also temperamental. (I know this from the first hand experience of owning an MG many years ago) One thing that most people probably don’t know, is MG built a custom made land speed record holder in 1957. A car custom built to be driven by Sterling Moss to a top speed of 245 mph at the Bonneville Salt Flats.

The MG EX181 was a bespoke automobile with one purpose; Go fast. The MG EX181 had a 1.5 liter engine from a MGA but it had been tuned to run on was 86% methanol laced with nitrobenzene, acetone and sulphuric ether. I can’t even imagine what the engineers went through to come up with that fuel formula. It doesn’t matter because it worked. In 1957, with Sterling Moss at the wheel, they had a world record setting run of 245mph and placing MG in the record books for all time.

The video below is a twelve minute short that documents the design engineering that went into making this car. It shows how they designed the car around Sterling Moss, streamlining the form for the best performance they could achieve.