Ed Ruscha has always been one of my favorite artists. When I was in Art School at the University of Kansas he had a heavy influence on the work I was producing at the time. Not so much his photography, but definitely his paintings and print works. The video above was Commissioned by The Getty Museum on the occasion of their 2019 Getty Medal to the painter, draftsman, photographer, and bookmaker, Ed Ruscha.

Produced by Matthew Miller the Getty Research Institute’s preservation and digitization of over a million images from Ed’s Streets of Los Angeles photo series. Miller then had Ruscha record a voice over for the piece using excerpts from Jack Kerouac’s “On The Road”.

I think this is a wonderful way to experience Ruscha’s photography of Los Angeles in a new way. If you are unfamiliar with Ruscha’s books I recommend checking them out. If you Google “Ed Ruscha Books”, you’ll be able to find them. Start with “26 Gas Stations”, or “Some Los Angeles Apartments”. They’ll give you a solid insight into where Ruscha’s head was in the early to mid-1960s.

The intersection between design and art can be a very interesting place to hang out, and I was reminded of this over the weekend, while reading reviews of two  new shows featuring the work of Ed Ruscha and Sophie Calle. Both artists create work that uses text extensively, both in very distinct ways.

The retrospective of American artist Ed Ruscha is currently at the Hayward Museum in the UK. Ed Ruscha studied as a graphic designer at The California Institute of the Arts, in Valencia California and his first job was as a layout artist at an advertising agency in the early 1960’s. His career has spanned more than fifty years, and has constantly involved a preoccupation with typography and lettering, used in an almost abstract sense. He uses words for their forms rather than their meaning; although in the mid 1980s he began to use longer sentences, or sections of sentences which taken out of context presented an abstract thought as well. Most of his work uses his own typeface, “Boy Scout Utility Modern”, which looks like a bastardized version of Wim Crouwel’s Gridnik.

The current show features work from across Ruscha’s career with a major focus on his text driven works. And the pieces show Ruscha’s training in graphic design. Each work has a mastery of layout, and balance between the text, the meaning of the word or phrase, and it’s relation to viewer. 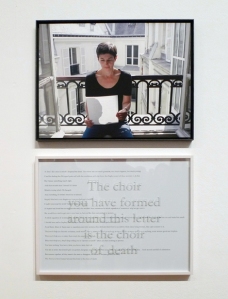 Sophie Calle’s show “Talking to Strangers”, is currently up at the Whitechapel Gallery. I have been fascinated with her work since seeing her show “Take Care of Yourself”, in 2007 The entire show is based on a break-up email sent to her by an ex-lover. Calle forwarded the email on to 110 women which included judges, lawyers, ballerinas, actresses, librarians, english professors, her mother, etc. and asked them to interpret the meaning of it. Calle then went on to document the results in beautiful pieces that combine photographs of the individual women and typographic representations of their repsonses placed below. In addition included a few short film pieces.

The wonderful thing about the show is that since it is a work based on written communication, the installation felt a like you were walking through a book. It was a great show that pushed the limits about where design stops and art begins. Each of the pieces feature a section that could have been used by anyone in the business of graphic design and layout.

This is a subject that has always interested me. I have a background in Fine Arts. I went to school with the full intention of becoming a self sustaining fine artist sitting in my studio and painting all day. The problem is, I have worked in the design and advertising industry in some capacity since I was 16 years old. So my own work has been heavily influenced by the very craft known as “Graphic Design”. I remember reading a quote from Willem DeKooning when I was in college about illustrators and illustration. He said, and I know I am going to get this wrong here, “An artist can always create a great illustration, but an illustrator can’t necessarily create a great painting”, or something to that effect. At the time I agreed with it, but more and more I’m not sure that is true. I think the same thing could be said in reverse about a large number of painters as well, and just like that statement you could make the same argument for designers etc.

Maybe this is a topic that I have been revisiting lately, because I am seeing so much new art work in galleries that has been so heavily influenced by the internet, applications like Flash, and Adobe Illustrator, and a blending of the Fine Art world and Design world thanks to the use of the personal computer in the creation visual media. So the question is “Can Graphic Design be considered Art?”