Anyone from Hallmark that might be reading this, raise your hand if you remember “T-Ink” from 2004 and the products Hallmark produced for less than a year with the technology? T-Ink had so much potential and it simply withered and died on the vine. The T-Ink project was one of the first things I worked on when I returned to Hallmark. It was such a cool product, and could have been huge if they could have figured out how to market it better. Fast forward to 2017 and check out Papier Machine from French Designers Marion Pinaffo and Raphaël Pluvinage.

Papier Machine is a set of 13 paper-made electronic toys. Each piece of paper can be cut and folded and assembled into the final toy. Another intriguing component of Papier Machine is that while there are instructions that come with the kit, the steps are not clear cut. According to Pinaffo and Pluvinage they still want users to interpret the instructions themselves, opening up the pathway to more possibilities, especially for kids.

Like T-Ink, the printed paper is equipped with reactive, conductive, and thermosensitive inks, which actually complete the electronic circuits and allow the toys to function. The toys are designed for kids of all ages and don’t require any special tools, skills or training. The designers want Papier MAchine to be all about fun, and exploration.  The 13 toys can create multiple projects that include Switches, a Gyroscope, Playing Track, Writing Track, Tilt Switch, Humidity Sensor, Wind Sensor, Mass Sensor, Power Reverser, Photoresistor, and Color Sensor. Pretty cool if you ask me.

Right now the only stereo system I have in my house is a Polk Audio Woodbourne system and it does a great job filling my smallish house with music streamed from my phone or tablet. I like it because it looks amazing, has a small footprint, good quality audio output, and only one cord. I hate wires. The thing is, I think I’m going to have to start saving for an upgrade because I just saw B&O’s BeoSound Shape, and I’m in love with the design of it. I haven’t heard it, I haven’t seen it in person, but the photos and the video look pretty slick.

BeoSound Shape is the design-driven solution to the prevailing issue of poor room acoustics in open multifunctional spaces. The damper tiles absorb sound waves rather than reflecting them, which not only improves your music experience but also actively improves the entire acoustic atmosphere in the room even when the system is switched off.

At the heart of the system are BeoSound Core, a connectivity hub hidden in one of the tiles that have the hardware for AirPlay, Chromecast, Spotify Connect, and Bluetooth 4.1, and support for Bang & Olufsen’s very own BeoLink system. The BeoSound Core also has wired inputs for Ethernet or line-in functionality, although the primary focus is on wireless streaming. A base kit starts at roughly $4,266 and includes eight tiles which include four speakers, two sound-absorbing acoustic dampeners, one amplifier, and one housing for the Core. The system is expandable up to 11 amplifier units each of which can support four speaker tiles, for a total of 44 if you need to fill a larger space.

Is it a good value for the money? Probably not. I know for a fact that for 4500 bucks you could pit together a sound system that blows this away, but that isn’t why I am interested. I want this because it doesn’t look like a stereo. Because there are endless custom configurations. And because my old broken down ears aren’t going to be able to hear that much of a perceivable difference. I really love the concept, and execution of this.

Danish audio maker Låmpion has released a new tube amplifier designed by Stefan Radev. The minimalist tube amplifier is one stylish piece of hardware with a clean aesthetic blending aluminum, wood, and glass to create a clean, simple, functional design. The amp is compatible with both Apple and Android devices and can be used with  stand alone audio equipment as well. 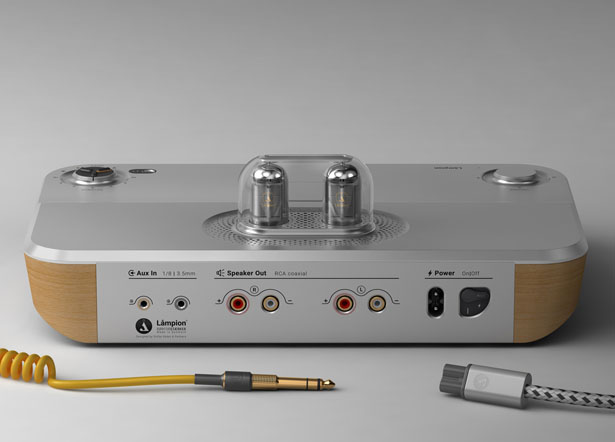 There is something timeless about the look of this object, and it feels like the design team really took into account how the amp will look when paired with an iPhone or an iPad. The rounded edges and materials mirror what is going on with the Apple products so well, and the look of the build quality screams premium audio. The design team  applied a well balanced choice of proportions, materials, and accents to create the clean look of this amplifier without introducing to much technological clutter.

No word on pricing and availability, but I suspect this will be Europe only and carry a hefty price tag when it’s all said and done. 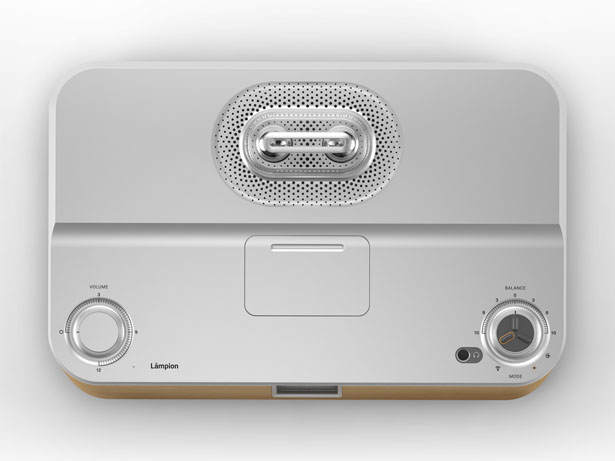 A few years ago I worked on a design project that was built around a technology called T-Ink. Basically the way it worked was, you printed a circuit board onto a paper surface, the circuit board was connected to low power lights and speakers. When you touched parts of the printed design you completed the circuit and things would light up and make noise. The project never went anywhere do to costs and other hurdles, but it is nice to see that similar technologies not only still exist but they have improved upon them.

Fulton Innovation has developed a system using induction power to create a series of cereal boxes for General Mills that light up in stages to create an eye-catching effect on store shelves. The technology is called eCoupled, and this application is only a demo at this time, but I guarantee you this is going to be rolling out over the next year to store shelves near you.

While I am more of a fan of creating more green packaging, something recyclable, I can see this having a massive impact on the package design industry, or the stationary/greeting card industry. It opens the doors to a number of new, low-cost applications that extend the base products visual appeal.