The 2014 World Cup is wrapping up and it’ll be another four years before football fever takes over the world again. Unless you have been living under a rock for the last month, you probably know that the current World Cup games are being played out in Brazil, with the final four teams playing the last semi final matches this week. Over the last month teams from around the world have played in 12 stadiums across Brazil, and Portugese illustrator André Chiote has illustrated five o them focusing on unique architectural details, using a color pallet based on the Brazilian flag with green blue and yellow. The illustration style is clean and simple with a nod to the international style of the 1960’s that brings a strong visual impact to the posters. Great stuff. 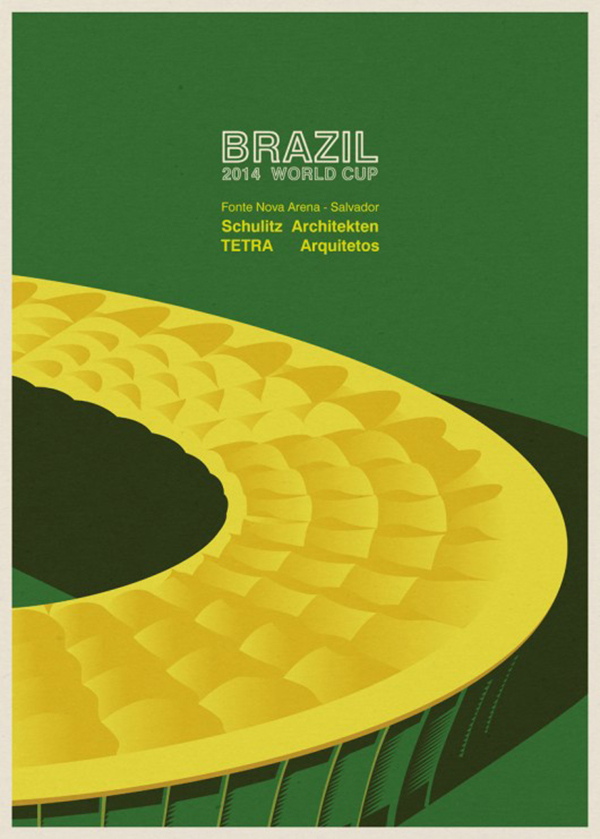 Earlier this year BVD did a rebrand for 7 Eleven that introduced a fresh updated look tot he convenience store chain in Sweden. BVD is back again, extending the look of the new branding to packaging designs for 7 Eleven’s food line.

The packaging is built around a simple clean look featuring easy to read editorial that lists the ingredients. More importantly, in many cases the packaging allows the food to be seen so the consumer can tell if it healthy, fresh, and appealing.

The packaging reflects the re-brand from the store, but varies slightly going with a more muted color pallet that won’t detract from the food itself. A sans-serif font that is very much from the “International Style” of design. And a simple grid layout that structures all of the packaging with the same visual voice. I think it is a winner, and something 7 Eleven should consider bringing to the rest of their store world wide. 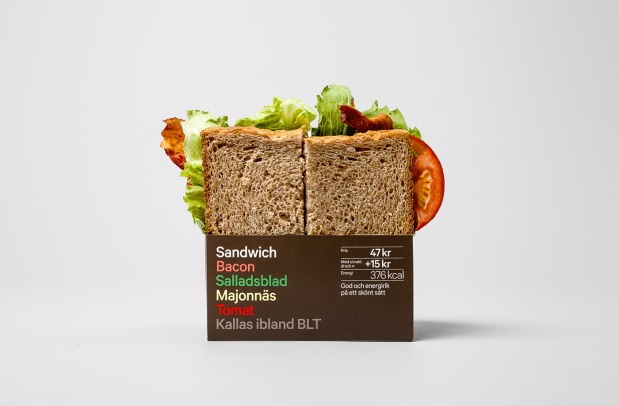 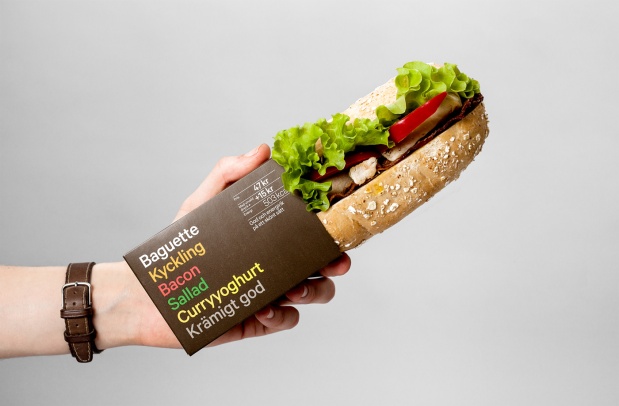 There is something so completely humorous and ironic about designer Mike Joyce’s personal project “swissted“. Punk gig posters look nothing like the highly stylized images Joyce has created using a Swiss Modern / International Style approach. While his posters are beautifully designed they are the antithesis of punk band gig posters from the 70’s, 80’s and 90’s. The two movements have nothing to do with each other stylistically, and the cool modern design look flies in the face of all things punk rock.

Each poster design is set in lowercase berthold akzidenz-grotesk medium (no it’s not helvetica), and each poster represents a show that actually happened (there are a boat load of them too.) Frankly I think these posters are great. Wonderful design, typography, and color pallets. What I’d really like to see is a comparison between these and the original flyers they are based on. I’m sure

swissted is now available as a book from quirk books. You can get it here. 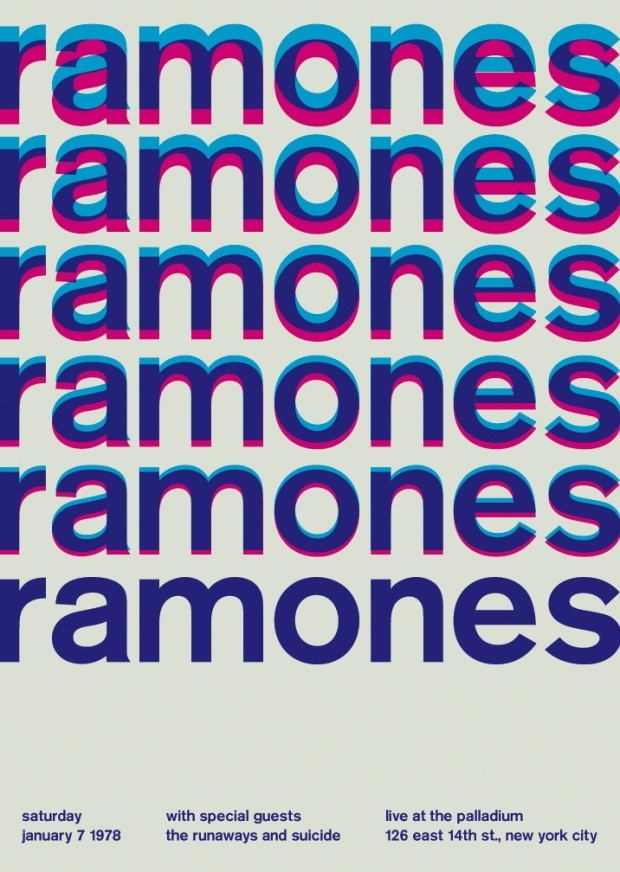 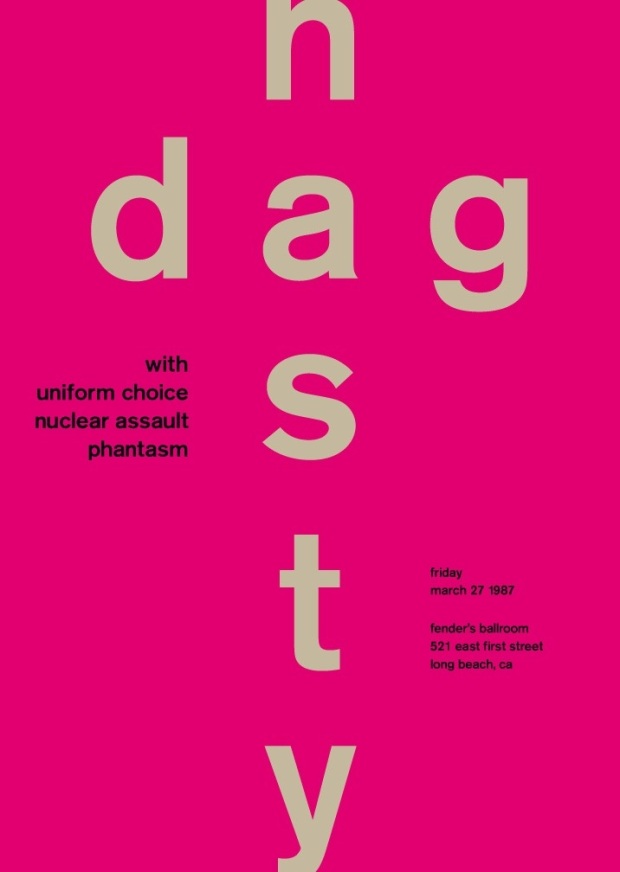 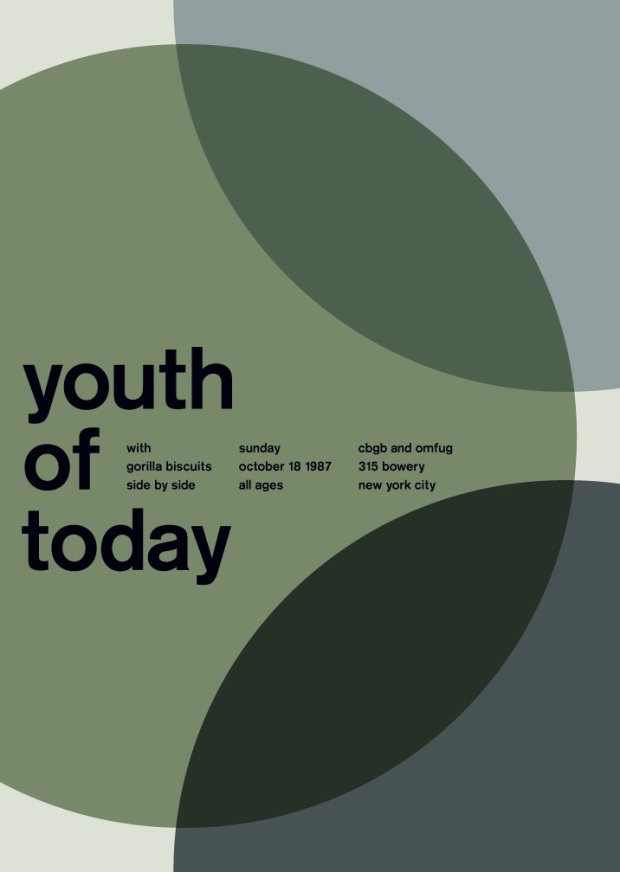 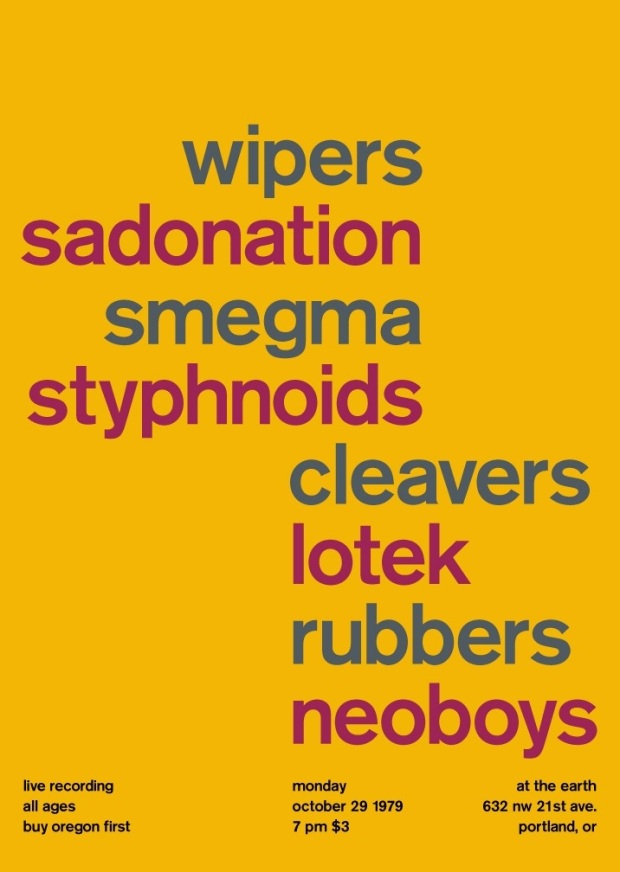 Simon Page is a self-taught graphic designer from the UK with an emphasis on typographic art, illustration and geometric design. Earlier this year he produced a series of posters for the International Year of Astronomy 2009 (IYA) campaign.

The posters like most of his work is brilliant in it’s simplicity and use of geometric form. The style reminds me of  that mid 60’s to mid 70’s period where international style had distilled itself down to basic elements and was being widely used in text book cover design. Seriously, these posters remind me so much of science book covers from Jr. Highschool. Page’s color pallet is refined and exquisite. There is an excellent sense of balance, and layout that is carried across every poster.He uses subtle textures in the backgrounds that gives an almost nostalgic sense of age and use. The typography treatments are understated, yet help to pull the entire composition together in each poster. These posters are really, really nice.

According to Page he is influenced by a number of contemporary designers like, Alex Trochut, Joshua Davis, and James White. I would go on to say I think he has been influenced if even unintentionally, by designers like Joseph Müller-Brockmann,  Emil Ruder, Paul Rand, and Armin Hofmann.

The full series of International Year of Astronomy 2009 posters are available for purchase via: Graphic design by Simon Page. 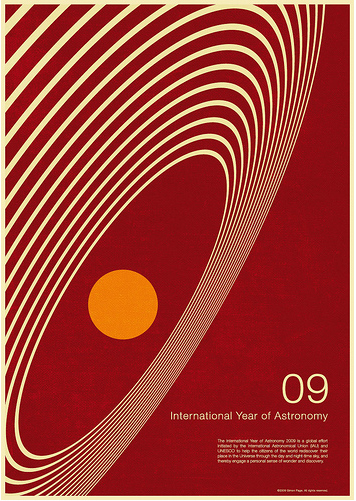 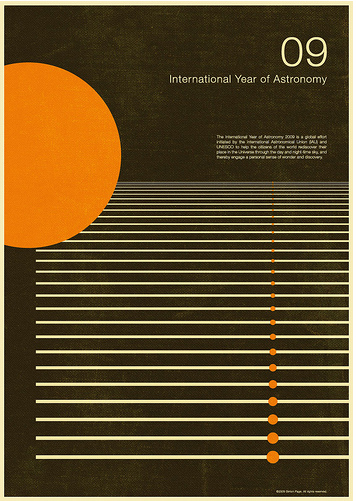 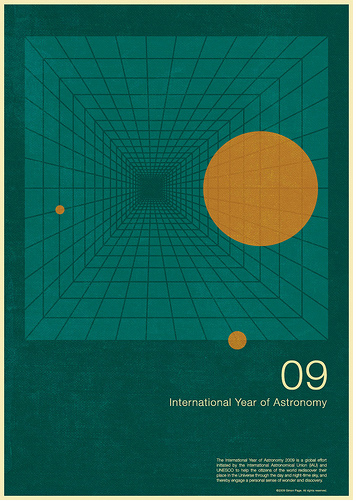 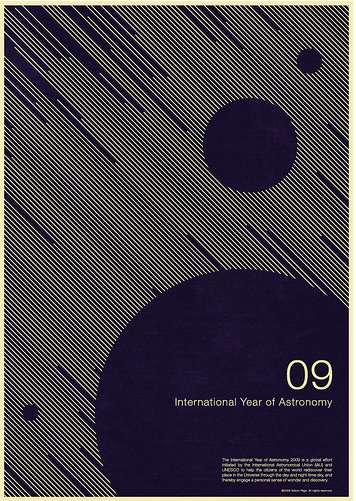 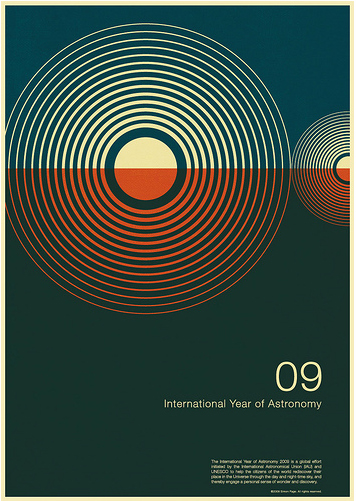 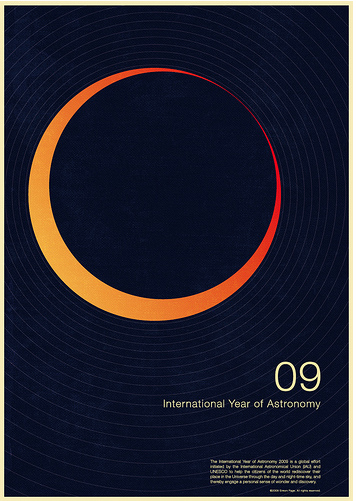 This is my 100th blog post, and I think that the fact it is a Design Friday post is appropriate. I need to figure out a way to convert all those frequent flyer miles from the trip to South Africa into a first class ticket to London for this exhibit which opens this month. “Designs On Delivery” is a show that is being presented by the GPO in London for a limited time. October 7th to November 4th. The show features poster art for the UK General Post Office from 1930 to 1960. From the slides shown, this is a great example of the emerging international style, and it’s refinement moving to the 1960’s. The exhibit features the work of Edward McKnight Kauffer, FHK Henrion, HS Williamson, Tom Eckersley, Leonard Beaumont, Jan Le Witt, George Him, Hans Schleger, Vanessa Bell, and other influential designers of the period.

“This period was also the beginning of Post Office advertising, and posters played a vital part in campaigns such as persuading people to post early and encouraging clear and correct writing, right postage and careful packaging. This was especially important during the war years, when great demands were put on Post Office services. Much of the success was due to Stephen Tallents, who became the Post Office‟s first public relations officer in 1933, successfully combining techniques of commercial advertising with government service. As a member of Designs & Industries Association, Tallents believed that social progress could be achieved through engaging with a mass audience.” Sue Barnard 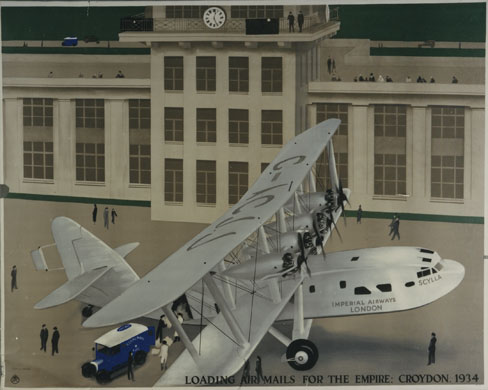 A few weeks back the folks over at Grain Edit posted some design work from Portuguese designer Cristiana Courceiro. I love her  work. Probably because it is so influenced by the international style of the late 50’s and early 60’s. I also like the fact that on her profile at Creative Hotlist she says,

“I like to collage vintage papers with contemporary images. cut, paste. I  hate pixels. I love glue and scissors, old magazines and pictograms. and Polaroids too.”

Personally I love pixels, but I can completely relate to the desire to be hands on with actual paint and paper. 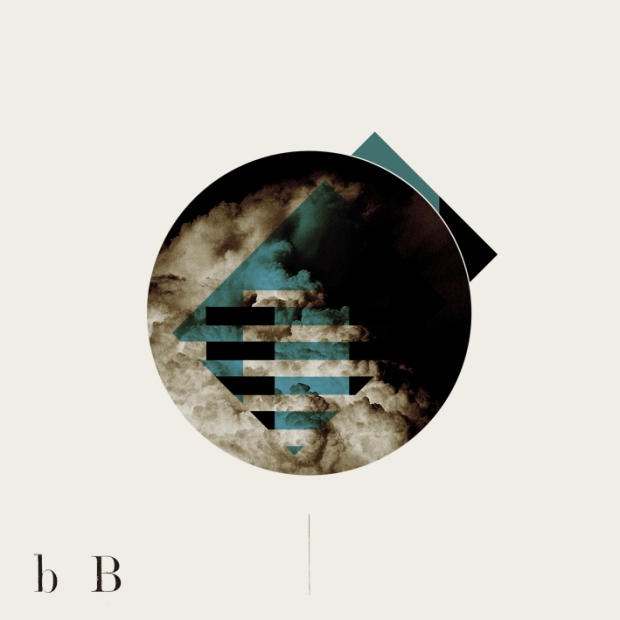 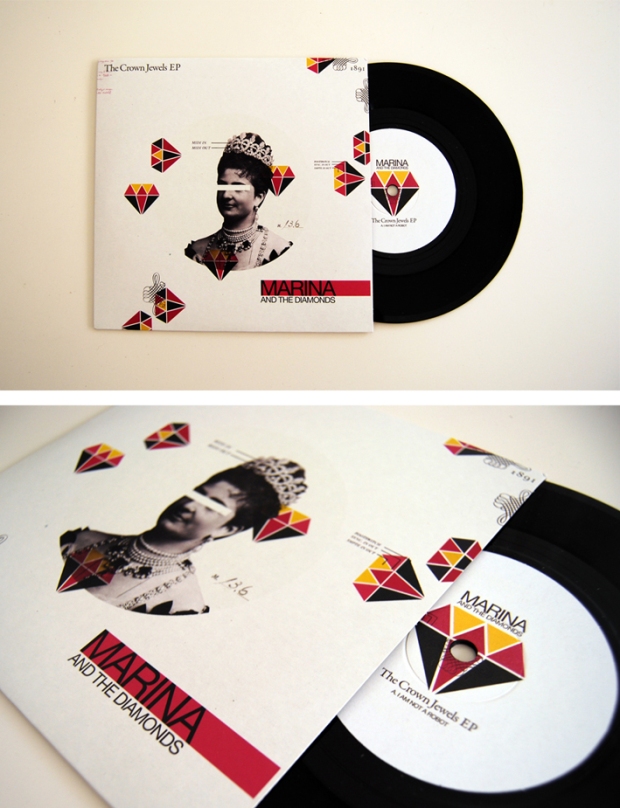