To expand awareness about it’s new line of jewelry, Murat Paris has introduced an iPhone application that allows potential buyers to scan an entire collection of bracelets and rings with the swipe of a finger.

Created by Agency .V. the application is designed to have your iPhone placed over the arm of the model. When the application loads, you simply swipe to change out the piece on her wrist or finger. In addition to viewing the catalog of products, the application also features a retail finder designed to help drive traffic to physical stores.  The store locator feels like a key component to the application itself, especially when you are looking at a luxury brand item that for most people requires hands on inspection before purchasing.

I have had “Hipstamatic” installed on my iPhone since the day it landed in the app store. I love the app, but I hate the in-app purchasing. Not only that I hate the total and complete lack of tech support that Hipstamatic fails to provide on their website. By that I mean there is no real way to contact the developer to ask why I keep getting the following error message on all in-app purchase attempts. 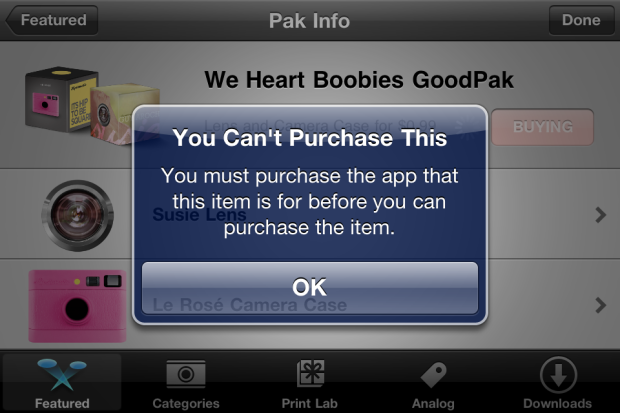 This is bad user experience design on all fronts. Here we have a really elegant iPhone app that completely fails at UX design at a point that is really critical to the developer. It fails at the point when they want you to spend more money on their product. What’s worse is, at the fail point the developer gives you ZERO options to contact them and get answers on how to fix the issue. Look at the screen capture from their support page below, and try to find a real contact us section. That contact window in the center frame won’t let you type more than 140 characters. There is no email support or chat support option. I know they are probably operating on thin margins and a low budget, but this is business 101. If you make software you need to have a way for people to get in touch with you. (BTW the “Customer Support” link at the bottom of the page brings you back to this page) 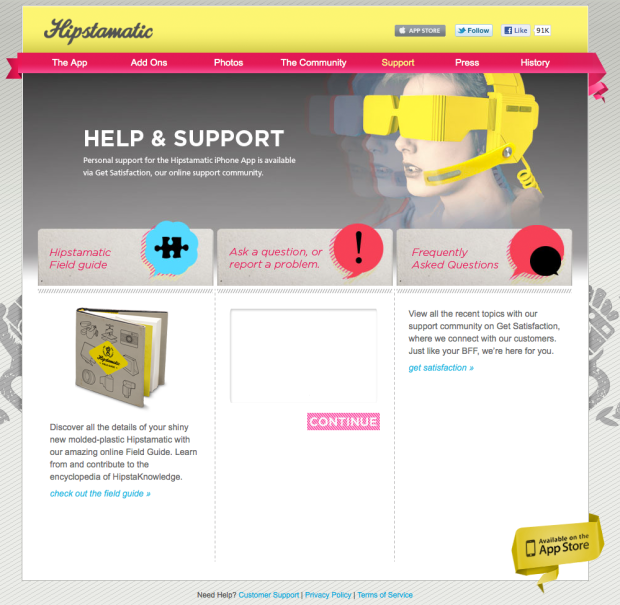 Hipstamatic folks, I would buy every add-on pack you sell if I could. I know at .99 cents it’s not a whole lot of money for you, but it is the sweet spot for in-app purchases. Oh and here is the deal… I have a pretty solid feeling I am not the only person that is having this issue with your iPhone app. Multiply me times ten thousand, and multiply that times the number of available in-app purchases. I think it adds up to enough to have email tech support on your website.

Love your app. Hate your lack of tech support.

I have to admit I am a little reluctant to use my phone as a digital wallet. (To many data security seminars from the days I worked for a bank).This however shows a slightly different approach that actually has the potential to gain some traction.

UK restaurant chain Pizza Express have partnered with Paypal to allow meals to be paid for using a specific Pizza Express iPhone app.

Recently my Social Networking apps have begun to narrow. I use Facebook less, and I was never a Twitter power user. In recent months as many of you know I have been using Instagram on a regular basis and find it becoming my first choice in mobile Social Media applications. It’s not that I have completely dropped Facebook, or Twitter, instead I use them as aggregator for my blog posts, and for my Instagram posts. A new application that I have begun exploring is also climbing up my list of Social Media favorites, and that is Path.

Path is a Social Network that is designed to, “to make it simple and easy to relive and explore your memories in deep and rich ways.” with your close friends and family. One of the basic goals of Path is to do for video what Instagram is doing for photos. Path lets you shoot 10 seconds of video, and then share it with a close group of friends and family.  In the current version, Path limits you to a network of just 50 people, but when you think about it, the number of people who most of us interact with on a regular basis in Facebook or Twitter, is probably 50 or less. Path isn’t about games, or fan pages, or over sharing. Path is about the basics of Social Networking, with simplicity in mind and a focus on capturing your important moments with video.

Currently Path is on version 1.7, and is still getting settled. The current version improves on the original by letting users now share to other networks to a limited extent. Originally, Path videos could be shared only with other Path users. Now you can alert your Facebook friends to the existence of a video, but they can’t actually play the video in Facebook; instead, they have to get a Path account as well.

There are a couple of things about Path that I find intriguing. First is ten seconds of video enough,

when you can share so much more on other networks like YouTube, Facebook, and Vimeo. Second, with a fairly closed environment, will path take off? I think the limit of ten seconds of video might seem ridiculous now, but so did the 140 character limit in Twitter to many people. As for the closed Eco system Path offers, there is something comforting about the security. Look at all the people who have had their Facebook account hacked in the last year and spammed your wall with all sorts of posts. Path might be on to something by keeping your network to 50 of your closest friends and relatives.