It’s Friday, and here is a little food for thought for all my designer friends. This is the keynote speech by Mike Monteiro at Webdange 2015. it’s worth watching. Seriously. Take 45 minutes of your day and listen to what this man has to say.

The video below from Mike Brookes was inspired by the animated short that was featured at Apple’s World Wide Developer conference last month. If you are a designer, working in any field, this is worth watching. If you have seen the Apple Keynote animation it might feel a bit familiar, but the message rings true to anyone working in a creative field.

Just in case you have been in a coma, or living under a rock for the last 24 hours, yesterday Apple introduced the iPad 2 to the world. On the surface the update seems like a fairly minor upgrade, with a simple speed bump, addition of cameras, and the gyroscope. (stuff that probably should have been in iPad 1) The thing that made me say “Yes I’ll buy the new one.” was the 2x faster CPU and the 9x faster graphics chip sets. 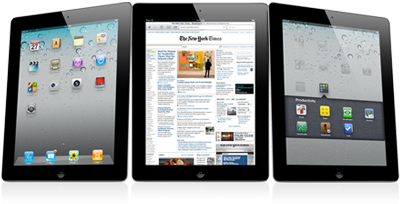 This extra horsepower under the hood opens up the possibility for some serious and complex computing for full featured applications like Apple’s iMovie, and Garageband for the iPad. With the upgrade to the 1GHz dual-core Apple A5 CPU, and the faster dedicated graphics chip, the iPad 2 is not just a mobile media center with light browsing capabilities.

The iPad 2 packs enough power to run an iPad version of a fully functional Photoshop for example, not just a simple photo editing application. (rumor has it that Adobe is indeed working on a version of Photoshop for the iPad that is more functional than the iPhone version.) In addition to applications like Photoshop, the iPad 2 will be able to run some serious 3D applications that scientists, doctors and engineers require for their work, or third-party video editing software that will be a huge benefit for video pros. Bottom line, it will be able to pretty much do anything that doesn’t require moving of huge amount of data that the 32 to 64GB of storage space can’t handle.

The new power combined with a thinner and lighter form factor will allow people to use the iPad in even more situations. It will truly become a transcendent device that allows people to use this device where previously a mobile phone’s screen and processing power was too small to handle the job or a laptop was too big and heavy for the situation.

I use my iPad for content creation and sketching on a regular basis, running applications like Brushes, SketchBook, ArtRage, and Photogene, as well as Pages and Keynote. I am looking forward to a more responsive device, that is capable of doing more tasks. While I wish that the iPad 2 had a higher resolution screen and a card reader, these are two things that I can get by with out for now.

My current iPad has already replaced my aging laptop, and the new iPad brings enough to the table to justify selling my old one and purchasing the iPad 2.

Today marked day two of the Adobe MAX conference in Los Angeles. I’m not sure how to describe the train wreck that was the keynote today. I thought I was going to be attending a two hour general session that highlighted the Adobe CS5 Master collection. A keynote with an equal focus on design tools as well as coding technologies that make all of this stuff go. What I was subjected to was an I’ll planned, horribly written, poorly acted, not very funny set of skits that were way to long and featured Adobe Staff.

Programmers and Project Managers trying to be stand up comics is not a good mix people.

This could have been a great session, focusing on Adobe’s push into the interactive TV, and mobile spaces with their tools. Instead it was a two hour train wreck that people felt compelled to laugh at, because you felt sorry for all the participants. I did get some good information, and when I get back on Thursday I’ll write it all up and post about it.

Unfortunately right now I just want to go back to my hotel room, close the curtains, curl up in a fetal position and try to wash the insanity I just witnessed from my mind.