One of the things that has always bugged me about our house are the Ikea cabinets that were used in the kitchen. There is nothing really wrong with them, I just want something with a better fit and finish. We haven’t pulled the trigger on a kitchen upgrade yet for a couple of reasons, one of them being finding the right look for the house and extremely open floor plan.

The current kitchen setup is a large white island with a black Paper Stone counter. It is void of hardware, and the glass cook-top disappears into the surface creating a large black area floating in the center of the room. There is a single wall of cabinets that run floor to ceiling behind it. The kitchen is minimalist, clean and utilitarian.

Today, while browsing through Toncelli’s website I came across the new kitchen designs for 2012 and saw something I really like. Something I would install in my house in a heartbeat. Toncelli’s new PRISMA line. This is a high-tech kitchen with a minimalist aesthetic, great geometric lines, high-grade surfaces and finishes, and remarkably similar to what already exists in my home.

PRISMA is simple, modern, and dynamic, with revolutionary technologies provided by Samsung (the funny thing is, that sure looks like an iPad in these photos not a Samsung tablet) . Prisma was designed in collaboration with user experience design firm Experientia from Turin. This partnership has resulted in a series of surfaces that create a “prismatic” composition that transmits an immediate sense of weightlessness, emphasised by the lights that illuminate the pieces from below. The invisible handles, which include a vertical version for the refrigerator help to minimize the look of Prisma giving it a sculptural quality. 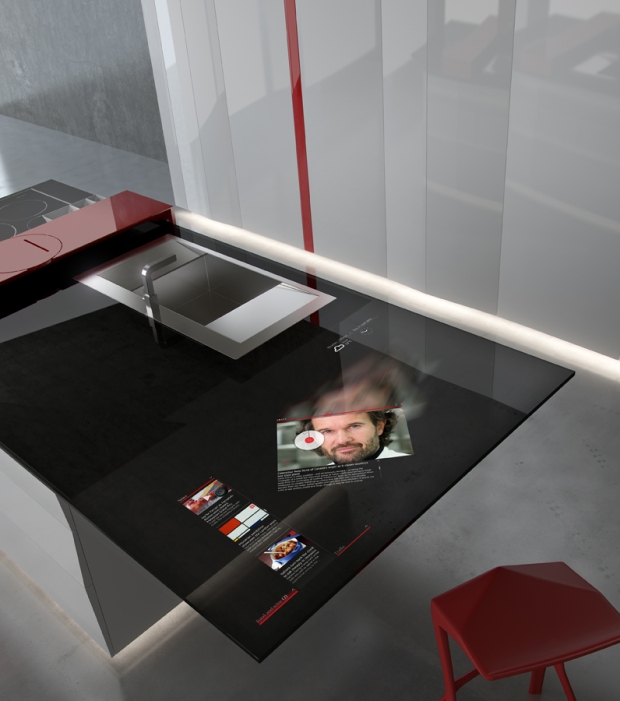 The counter surfaces are an interactive workbench that features a Samsung touch-screen computer, with an internet connection for constant updates to content from a programmed menu.

Living at Modular 4 is actually a pretty amazing experience. I have very few complaints about the house, but there are a few things that just leave me baffled. 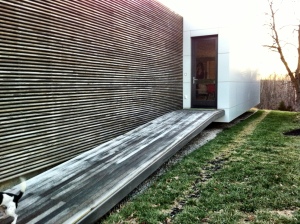 I don’t get how they designed the house with no overhang above a front door that sits on the North East side of the house. When there is weather of any kind you are standing in it as you try and unlock the door. I don’t get the recessed lighting above the sliding glass doors. You have to remove the siding to change the bulbs in them, and the fixtures used were cheap interior florescent under cabinet lights.

Then there is the ramp to the front of the house. This one I get and don’t get. I get that it look beautiful, and is an aesthetically pleasing entry into the house. I get that by not putting a railing on it, it looks cleaner and doesn’t detract from the house. I get that it meets code for wheel chair access, which was probably required since the home was partially state funded. I don’t get the fact that it is located on the North side of the house and never sees the sun. Because of this, it takes forever to dry after it rains. Frost never melts before the afternoon. And like this morning, it was covered in a thin coat of black ice that made for a morning in the ER.Yes Kristy slipped and fell, just like I did last year, and the previous owner did 3 years ago. Like the UPS guy did 2 years ago. I think you see where I am going with this.

Looks great, functions horridly. It is one of those things where design trumped function

and the result is less than ideal. I don’t want to change the house. I like the way it looks, and I love the graceful line the ramp creates running to the front door. This means I am going to have to get creative.

Step one… buy a heated rubber mat that melts up to 2 inches of falling snow an hour. I’m talking about a HeatTrak mat that can be rolled out in bad weather and rolled up and put away in the Spring and Summer. We’re talking about a $1500.00 investment, but it beats a major law suit, or permanently crippling injury. It isn’t pretty, but it works, and according to the manufacturer, it costs around .60 cents a day to run.

A few months back Kristy and I swapped out the Flor carpet that we had in our living room. We had brought it with us from the old house, and at 5 plus years old it was time to go. For almost 6 months we debated buying a new wool carpet, or just getting more of the Flor squares, and going with a new pattern and texture.

We settled on Flor for a number of reasons. First off it is a fairly green solution and Flor recycles your old tiles. Second it is durable and with two dogs that is a huge plus. Third, for the money what you get is a great option.

The old arrangement with the new carpet.

What we originally decided on was a change in texture by going with a Flor line that had a raked texture to it. When we got the carpet though we were a bit disappointed. The edges of some of the squares were frayed, and required trimming, some of the squares were off by about an eighth to a quarter of an inch in size. It’s not much but it was enough to drive me crazy. I went ahead and installed the carpet hoping that when it was all put together it would work, unfortunately it didn’t, and after 2 months we decided to see if we could return or replace it. 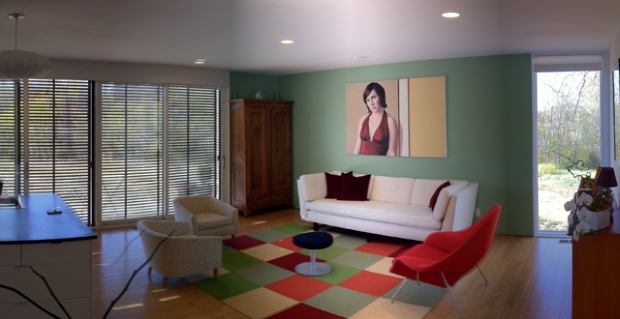 The new arrangement with the new carpet.

One call to the Flor customer service department and it was settled. They agreed to replace the carpet with the same style, or to let us replace it with a different texture/style all together. They were really wonderful about the whole process. They said they would ship the new carpet for free, and give us return labels to return and recycle the old ones. You have to love a company that is willing to work with you, and wants to keep you as a customer.

So, on Thursday the new carpet arrived, and on Friday the old carpet left. Thursday night I put down the new tiles, and with that… Kristy and I decided to rearrange the entire living room this morning. That led to re-hanging art. So in the course of two hours, we moved a bunch of furniture, re-hung some paintings, moved the wireless speaker connections, and reset the front half of the house. Now the room flows better, and seems to feels more open.

In the process I found a bunch of stuff I need to repaint and touch up now. As they say, One thing leads to another. At least I now have a list of things to work on over the winter months.

About 4 months ago we purchased the tile for the bathroom remodel, but before it was delivered the store switched ownership and our order was lost forever. The tile never got delivered, and what we chose is now out of stock. For the last two and a half months we have been working with our credit card company to get the bill credited back and things straightened out. Just as it looks like we are seeing light at the end of the tunnel on that issue, Fab.com ran a sale on Modwalls tiles over the weekend and we scored. 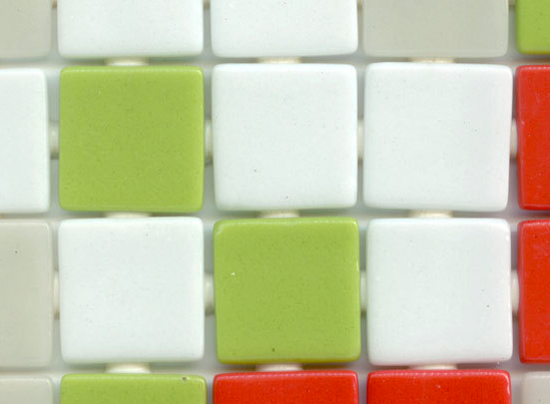 I purchased more than enough of the Modwalls Veridian Blend Orchard, to do the bath enclosure floor to ceiling.The tiles are made from 98% recycled glass that is reclaimed from buildings as well as manufacturing pieces from windows and windshields. This gives the tile a soft iridescent sheen and allows the color to shimmer as light hit hits it.The color pallet and look of the tile is inspired by mid century and modern architecture and interior design and can be used both indoors and out. This pattern and color break down works well with what we already have going through out the house, as well as the new brushed nickle hardware and Lacava medicine cabinet.

Last week I called 311 to ask the city if I could get the remaining overgrown trees and bushes out by the street cut down. They sat on the city easement, so I figured the city should help me remove them since they had grown into the power lines and were taking over the street. Somehow the city misunderstood the request, and mowed my lovely field into a giant crusty, heat baked pile -o- brush.

I came home tonight to find all the grass gone. Cut to 10 inches high, with the remaining dead and dying grass left piled on top of what was left of the field. I’m not sure what to think of this. We still have almost 3 months of growing season, so it might come back if the heat breaks. On a positive note, it did give me a lovely vantage point for a view of my house.

I just had this conversation I just had out front while walking the dogs.

Woman in her car to me out of her open window, “This street is a dead-end.”
Me, “Yeah, there is a “No Outlet” sign at the end of the block.”
Woman, “That doesn’t mean dead-end.”
Me, “Actually it kind of does. No Outlet means, well, No Outlet.”
Woman, “Is your house solar-powered?” (I think this was her lead in to start a conversation)
Me, “No, the solar-powered Studio 804 house is on Springfield.”
Woman, “Hey can you give me 20 dollars? By the look of your house, you look like you have money.”
Me, “What?”
Woman, “Can I have 20 dollars?”
Me, “Lady I don’t know what you are thinking, but how do you know I don’t need 20 dollars? What do you need 20 bucks for?”
Woman, “I just need it”
Me, “Sorry I’m not just giving you 20 bucks, and no just because my house looks different then the other homes around here doesn’t mean I’m rich.”
Woman, “F-You”
Me, “Well now you really aren’t going to get 20 dollars from me.”
Woman, “What?”
Me, “If I had money on me, and you really needed it, and were desperate, I probably would have given it to you. But I don’t have money on me, you don’t seem to have an actual need, other than thinking I am rich, and you just said F-you to me, so yeah you aren’t getting anything.”
Woman, “F-you, F your house, F your dogs, and F your money.”

and she drives off.

Why is that the first heat wave of the year brings out all the crazy people?

Half of the south side of our house is a wall of sliding glass doors. There is nothing wrong with them, they are high quality, well made doors that have no problems at all. One of the things that I wish our architects and builders would have done when they built the home, would have been to upgrade to something like a Nana Wall system. I love the folding glass wall that collapses back into a single stack, exposing the entire span into a single opening.

Tonight when I was cruising the web on my iPad I came across a wall system that I hadn’t seen before. Similar to Nana Wall, the LaCantina system looks just as nice. LaCantina is an aluminum bi-fold system, that features a narrow sill and rail system that reduces the door profile and allows for more glass. The systems come in a clear coat, or with a dark bronze finish, but according to the site, LaCantina will do custom color matching for a fee.