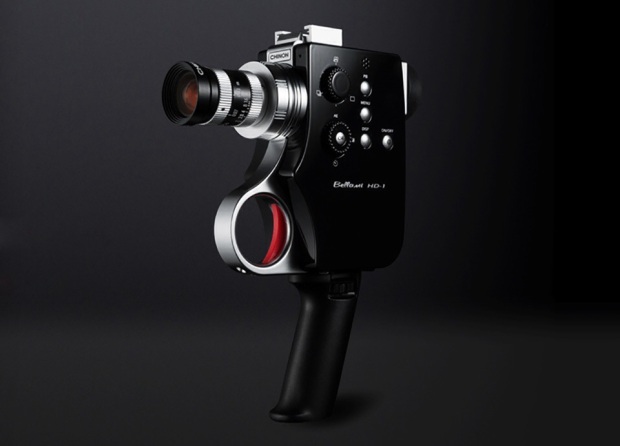 In the last few years there has been a massive surge in retro-styled cameras. Fuji and Olympus lead the way with their micro 4/3 camera lines, but even Nikon has jumped in with both feet releasing the Nikon FD. On the video front, retro-styling of camera gear has been slower but still on the rise with cameras like the Black Magic cinema, and the digital Bolex. One recent entry into the fray is the new Chinon Bellami HD-1 Super 8.

The Bellami, was Inspired by the 8mm film camera of the same name from the 1970s. The shape, control systems, ergonomics, weight, optics placement and more mirror the original.

The Bellami HD-1Digital Super 8 shoots full HD, 1080p at 30fps. The frame rate might put off some who swear 24fps is the only way to shoot. Frankly I’m not one of them. I think the whole 24fps vs 30fps needs to be put to bed. It’s a Mac vs Windows argument. The thing is, this camera isn’t designed to be a workhorse. It’s a retro-styled camera with digital capabilities. The look is designed to appeal to the nostalgic, not compete with a Canon C300.

What the Bellami does offer is a screw on lens mount that let’s you slap a ton of full manual lenses on the front. It shoots RAW DNG files which allow the cinematographer to tweak the footage in post to create a stylized vintage look by creatively tweaking color balance, temperature, and exposure.

The Chinon Bellami HD-1 is available for about $850 USD depending on exchange rates with the Yen. Currently available only in Japan, it can be bought online if you’re willing to pay for shipping. 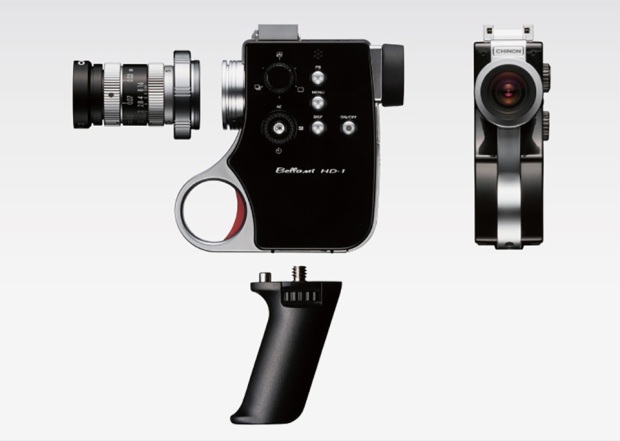 If you haven’t seen it yet, the video below is one of the promo spots for Style from the folks at Gretel. This actually dropped about 10 to 11 months back, but I keep hitting it for inspiration. Great timing, use of audio, editing, and animation make this piece. It has a slightly retro 1980’s feel to it, but not so much that it feels overdone. The quote below the video showcases the thinking behind the clip.

“Style has been on the air for over ten years and though they’ve enjoyed some success building an aspirational, upbeat network that viewers trust, the brand wasn’t reflecting their full potential. They were looking to make a big splash, and to craft an image that truly lived up to the promise in their name. We really wanted to capitalize on this opportunity to give Style a look, energy, and point of view that would help them stake their claim in the category.

We took our initial inspiration from something in the original brief: seeing the world through a ‘style-filter’ and we channeled it into the idea of illustrating how a style-obsessed mind works. How do über-style-fans see the world? They’re constantly searching, marking, clipping, pinning, liking, blogging, comparing, shopping. They’re looking at your shoes, watch and wondering where you got that shirt. We tried to visualize that process and illustrate that mindset.

The logo itself is an example of this idea in action, it can easily be dressed up or down without losing its core identity. It can feel sophisticated and subtle or brash and bold. It’s just one part of our toolkit that strikes the necessary balance between a loose, expressive design and the structured, defined brand package any network requires.”

I like, and own a number of fine timepieces. I also used to own a very nice Lambretta back in the day.  Actually I wish I still had my TV 175, but alas it went away years ago, and I simply don’t have the time and patience to maintain one these days. The scooter is not the subject of this post, neither are luxury timepieces. This post does however combine Lambretta, and watches.

Lambretta, still manufactures motor scooters, although none of them in my opinion are as iconic as the classics from the 1960’s. That doesn’t mean they aren’t stylish designs, I just prefer the look of the vintage scooter. Lambretta like so many other brands has branched out over the last few years and now extends their name to lifestyle accessories that help promote the primary brand. In this case Lambretta has developed a line of Swiss made watches along with a handful of other fashion accessories. 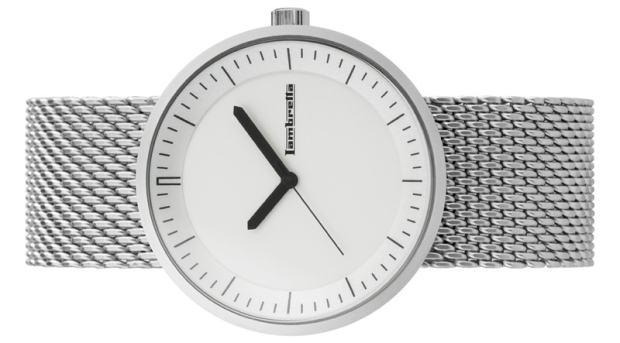 These watches are modern fashion accessories with a Lambretta inspired retro twist. The watch collection is clearly inspired by the look, design, and spirit of Lambretta scooters. The watches feature unique designs that are inspired by Lambretta’s racing history and mod scooter culture of the 1950’s and 60’s. While I wouldn’t compare these to something like a Rolex, they are fun, and the retro design styling looks great. The watches range from the simple minimalist “Franco: design, to the racing inspired chronograph “Imola”. The entire collection has a really nice look to it, and they appear to be well constructed with solid materials.  Like the Lambretta scooter, these watches are eye-catching, and have an affordable price point. 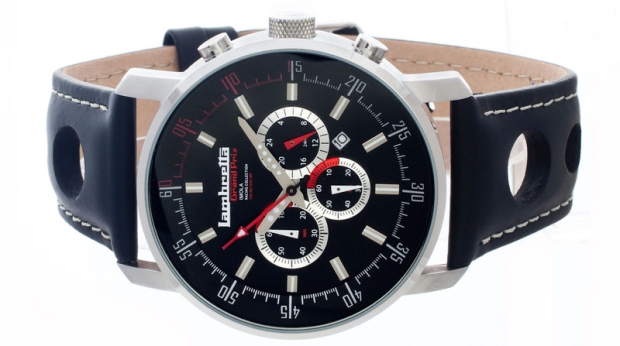 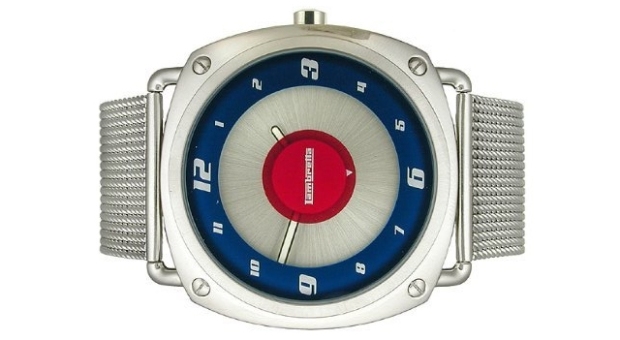 For design Friday, I wanted to take a step back. Ten years to be exact, and look at Marc Newson’s design for the Ford C21 concept car. Earlier this week my friend and fellow designer Jeff Chenault, sent me a link about this car, and I have to say I had totally forgotten about it. But in today’s climate, the automobile would probably have some success for Ford.

Back in 1999, then ford’s head of design, J.Mays decided to get a designer from outside of Ford to work on a concept car. His choice was Marc Newson who had been designing furniture and products but never worked on automotive design before.

Here is a little background on how the C21 came to be born. Ford’s Global Design and Chief Creative Officer, J. Mays, decided to hire a designer from outside the automotive field in order to break free from conventional automotive design thinking. His choice was Marc Newson, an emerging prolific industrial designer who had worked in aircraft design, product design, furniture design, jewelry, and clothing. J. Mays brief was simple. I want you to create a simple and affordable urban vehicle, which would be eco-friendly.

Newson got to work, creating a vehicle that appears both modern and retro in styling. The cabin has an open feel with its vertical slim pillars and large surrounding glass. The floor is completely flat that gently curves to meet the  vertical surfaces. Newson worked with Italian furniture manufacturer B+B Italia to produce the seats.  The entire dash panel can be moved vertically (along with the steering wheel) to adjust for different drivers. The interior is finished in a combination of orange PMS 021C, Newson’s favorite color, silver and white. Every element, from the specially woven carpet to the analogue instruments made by the Ikepod Watch Company, were designed by Newson.

The car featured unique thinking for the automotive world. The doors open out from opposing hinges, (suicide doors) for easy entrance and egress. The front seats swivel to help with entering and exiting the vehicle. The trunk opens like a dresser drawer pulling out from under the lid. Once again designed to create easier access to interior spaces.

The carbon fiber exterior features simple shapes and clean lines with no superflous decoration at all. The door handles are simple aluminum buttons surrounded by a translucent plastic ring which is illuminated when the remote central locking is activated.

The car is like a glasshouse, open light and airy with thin pillars flowing  around the clam-shell door frames to ensure the widest possible apertures. The front and rear views of the Ford 021C are dominated by single light lenses and a wrap around bumper.

Designed to specifically appeal to a consumer base of 21 and younger drivers, the car played to the fact that these consumers are highly brand literate, extremely technologically aware, and want quality products which express their individuality.

“The Ford 021C is an honest, simple, engaging car, and these are values which resonate with this important group of emerging automotive consumers,” said Ford’s Vice-President of Design, J Mays.

Mays went on to say, “The project has helped change the way Ford designs new vehicles. As car designers we tend to approach everything from an automotive perspective. The Ford 021C treats the car as a cultural icon. We have created a distinct point of view with this car and if you don’t get it, don’t worry – you’re probably not meant to.”

This kind of thinking was a radical departure for an industry that while shaping many aspects of the design world, has since the 1970’s produced more and more product that is for lack of a better word generic. All you have to do is look at the majority of cars on the road today. Many are slight variations of a competitors product, with conservative styling choices. The design philosophy behind the 021C set a foundation for new generation of Ford vehicles and was designed to appeal to a new generation of consumers in the 21st century.

“Ask children to draw a car and they’ll draw something like this, so in many ways the 021C is a familiar and comfortable object,” Newson said. “But it doesn’t use many typical automotive design cues, and while it does incorporate some interesting technology, it’s not technology used simply for the sake of it.” 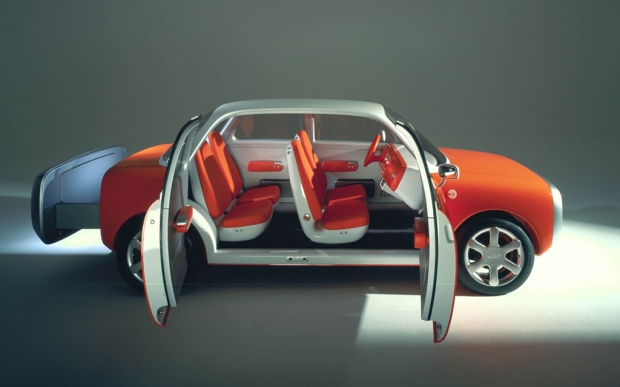 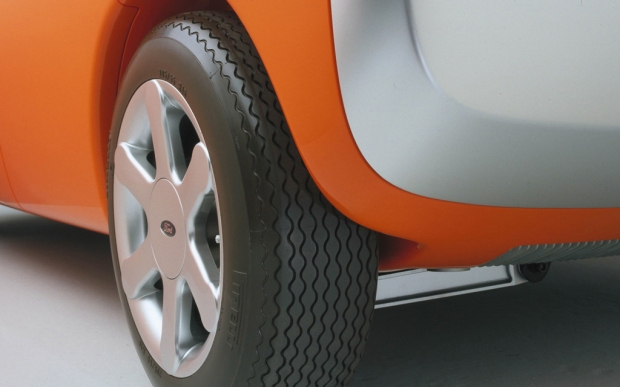 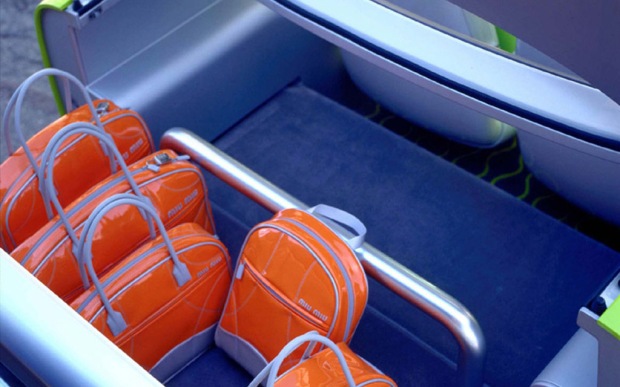 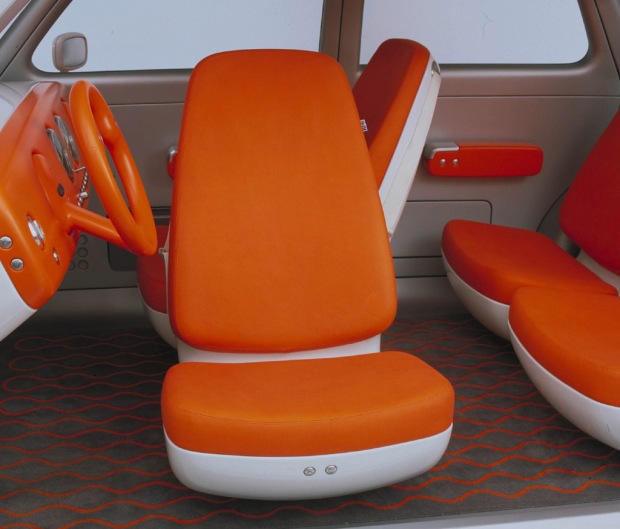 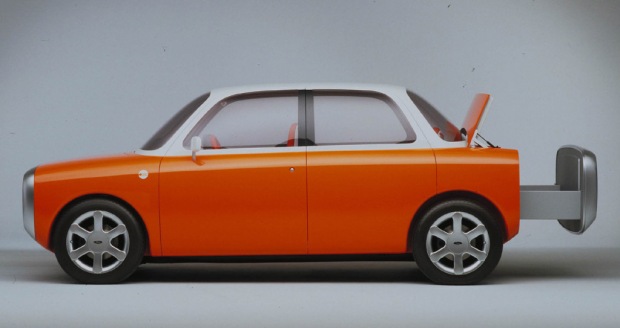 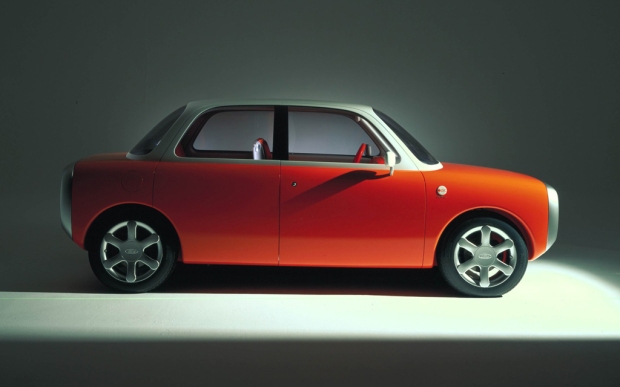 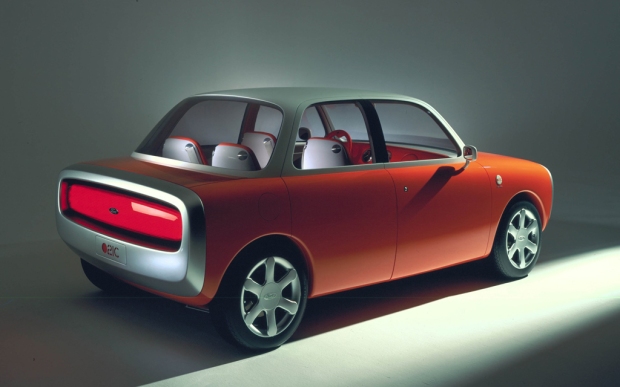 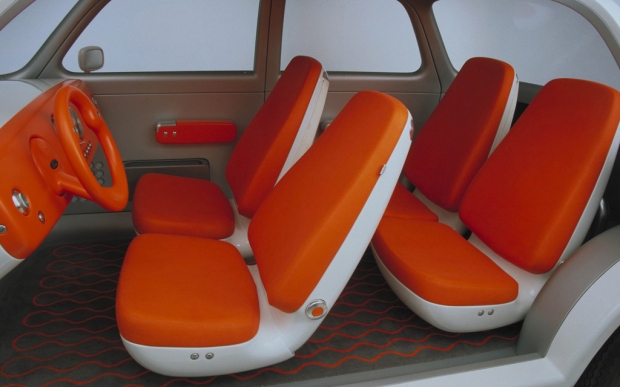 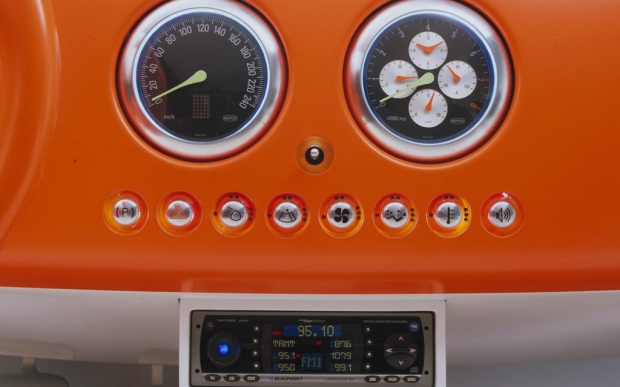