As the owner of two rescued and adopted dogs this campaign for the Battersea Dogs Home, hits a special note with me. Created by Ogilvy London, the campaign involves leaflets that are embedded with RFID tags that are synced to every Adshell billboard and inteactive screen at the Westfield Mall in London.  As people carrying the leaflets walk by video is dynamically loaded to the screen with a call to action message about pet adoptions.  The entire campaign is tied to social media using the hashtags #LookingForYou. This is such a nice blend of technology, design, and marketing prowess.

Since the campaign launched in 2014 Batersea has placed more than 3000 dogs in new homes.

For some time now I have been saying NFC will overtake things like QR codes as more Android handsets ship with built in NFC readers. Hopefully the next gen iPhone will have a built in NFC reader as well. When that happens, we will have reached the tipping point. Here is a great example of why I think NFC has a huge future with smart phone users.

“LikeBelt”, developed by Deeplocal, have created a prototype android app,that allows you to like physical, real objects. “Likes” are triggered by reading RFID chips embedded in real-world items which are read by NFC enabled Android phones. Those “Likes” show up on your favorite social network (who might I be talking about?). The LikeBelt terminology is a bit odd but if you can get past it, and the weird sexual thrusting, you can see the potential here.

Interactivity and store displays are usually a mixed bag. You have on average about 2 to 3 seconds to capture a shopper, and less than 20% take action with the interactivity. It really is an issue of competing with all the ambient store noise, visuals, and other shoppers. Over the last ten years I have worked on a number of projects involving interactive signage and store displays with mixed results. Even in a more quiet and intimate store environment, with well designed displays and interactive graphics the results have been fairly abysmal. I think that is why I am rather impressed with 109 Men’s interactive hanger idea.

109 Men’s is a clothing shop in Shibuya, Japan that has taken the interactivity to the individual product level. 109 Men’s is using interactive clothes hangers as triggers to provide customers with fashion tips and suggestions.The hangers feature embedded RFID chips that launch the interactive display which is positioned above the for sale items. When the hanger is lifted from the rail, the content automatically plays fashion tips and suggests other purchase items. The entire display is controlled by a computer system which can change the store’s background music and lighting based on the items that customers are checking out.

In addition the system keeps track of how many times an item is picked up, and this data is then aggregated  to demonstrate which items are the most popular, and which clothes should be positioned better.

As social media sites like Facebook and Twitter become even more widely used on a global scale, brands are figuring out better ways to integrate your online with the real world. This example from Renault at the Amsterdam Motorshow is a great example.

“Sharing your offline experience directly with your online friends.
Renault made it possible. By bringing the world of Facebook into the real world of the AutoRAI 2011. For the Amsterdam Motorshow we’ve created an innovative and real-time social sharing experience. At the largest automotive event of The Netherlands, 250.000 visitors could like Renault cars through a RFID Facebook card.
We placed specially made Facebook pillars in front of the Renault cars. By holding their pass in front of these pillars, a connection was made to their profile and the car was being “shared” on their wall. This way their offline car experience had been shared with their online friends.
At the Renault stand, car fans got a free card. With this pass, visitors were able to login to their Facebook profile. Since the pass held a RFID-microchip which stored their username and password, it automatically became their Facebook connect card. Ready to LIKE one of the Renault cars at the AutoRAI.
Simple, innovative and fun.”
39.099727 -94.578567

I love that Google and Babble fish translate web pages for you, but I really wish I had learned more foreign languages in school, because the source for this post was at times lost in translation.

This is what is going on here, I think.

This project by Timo Arnall, Jørn Knutsen and Einar Martinussen was designed to explore the invisible radio frequencies of ground level WiFi networks in urban spaces. The team created an image with light painting by mapping signal strength signal in time-exposure photographs. Using tall rods/antennas each containing 80 points of light, they were able to reveal a cross-section of WiFi networks present in the urban environment. The whole process was carried out using a  photographic technical called “light-painting”. 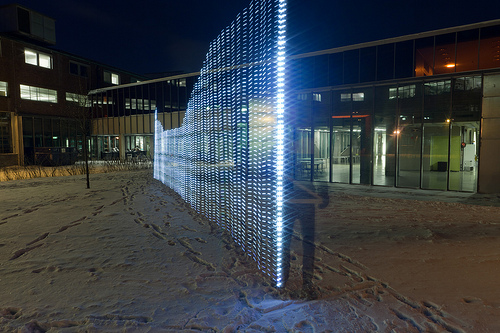 This was originally done for the 2009 film `Immaterials: the Ghost in the invisible Field’ which probed the edges of the radio fields that surround RFID readers and tags in the world. It also began as a series of investigations into what Matt Jones richly summarised ace `Immaterials’.

While the team was mapping out tiny RFID fields, they wondered what it would Be like to apply their light painting process to larger-scale radio fields given off by Bluetooth, WiFi, GSM and 3G. What they ended up building was a huge architectural light painting apparatus that could map out and city-scale Wifi networks.

We built a series of WiFi measuring rods/antenna,  each containing 80 lights that respond to the Received Signal Strength (RSSI)for a particular open WiFi network.The antenna arrays were set up in urban environments and shot with time exposure techniques to reveal signal strength, and Wifi fluctuation. The cross-sections represent a year of WiFi signal strength, and graph RSSI fields across physical space. The result is an abstract image and video.