The first big winter storm of the season is rolling through the Midwest so I decided to go in search of snow zombies. Here in the City Market district things are pretty deserted, but there are a few people out, and the snow sure ads drama to the afternoon. 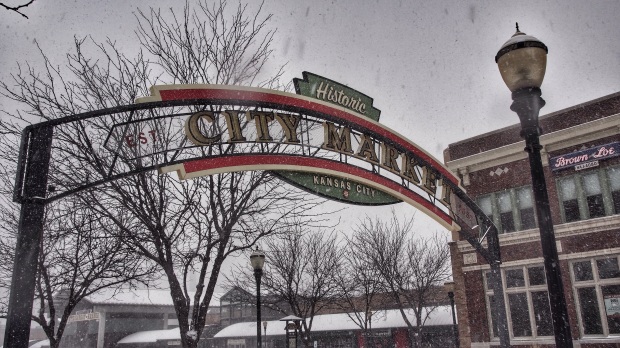 It’s been raining all morning here in Kansas City, so I decided to use the time to finish up a freelance illustration gig that is due in a week. The image below was created on the iPad using ArtRage, Snapseed, and traditional paper and pencils. The source images were provided by the client, in the form of low-res JPEG’s, that I used to create the base image from.

The original image was sketched out with Prismacolor pencils on a sheet of Strathmore that was scanned and transferred to my iPad. From there the image was reworked in ArtRage. There are 16 layers of digital painting and compositing, 4 of which are post processed imports from Snapseed. The more I use these two apps in conjunction with traditional mediums the more I like it. I hope the client does as well. Later this week I’ll post the final image with editorial, and final cropping for the layout.