When it comes to iPad styluses, I think I have tried them all looking for the best iPad creative tool. Sorry Steve my finger is good, but my brain is trained to use a pencil and paint brush. Over the last 3 or 4 years I’ve tried pretty much every combo of stylus and app, finally settling in on my Sensū and Art Rage as my tools of choice. That might change however now that Wacom has introduced a “pressure sensitive” iPad stylus.

Wacom is the market leader for pressure-sensitive drawing tools and tablets for your desktop workstation so it makes sense that they would bring to market a pressure sensitive stylus of the same caliber as there other Intuos products. The Intuos Creative Stylus is available for pre-order now, and will be shipping in October for $99.00 dollars. Full info is available at the Wacom site, and the video below is a rendering of what the stylus will look and feel like.

The new stylus supports the iPad 3, 4 and Mini, and can be used with creative such apps including SketchBook Pro, ArtRage, ProCreate, Adobe Ideas, Photoshop, Bamboo, and a host of others. The stlus features 2,048 levels of pressure sensitivity, palm rejection, shortcut functionality and uses Bluetooth 4.0 connect the stylus to your iPad. More information is available on the Wacom site.

today I took the day off from work and relaxed. Part of the day was spent working in ArtRage on the iPad doing a little sketching with my Sensu stylus. The more I use it, the better I like it. I’ve had the brush based stylus for about three months now, and seriously it is the best thing I have used for painting, sketching and illustrating on the iPad. 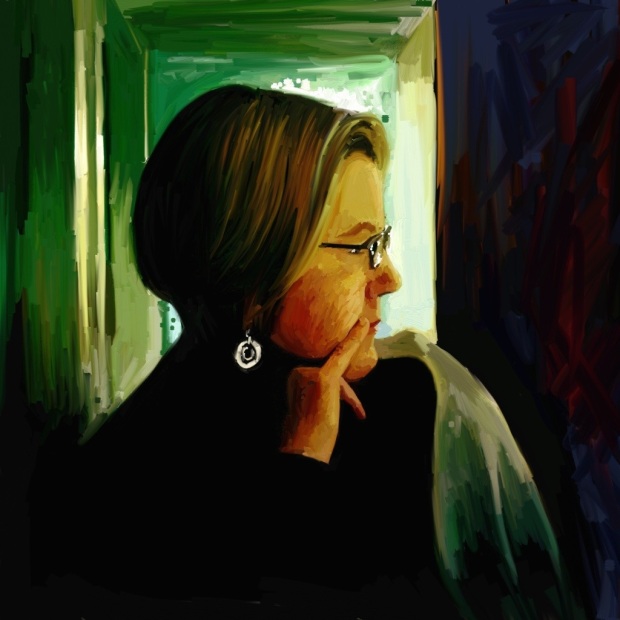 About a month ago I got a new stylus to use with my iPad and applications like ArtRage. To test out my new Sensū stylus is unique in the fact that active tip, is an actual paint brush. Unlike the Wacom Bamboo stylus that I still use on a regular basis, using the Sensū is a very different experience. To me it feels more like a real painting or drawing implement. My only wish is that it was pressure sensitive like an actual Wacom tablet.

To test the Sensū out I decided to add another image to the ArtRage motor sports group I did last year. I wanted to create something that I already had a process in place for, and could be compared to what I had done with the Bamboo. Overall I’m pretty happy with the results. Like all styluses, the Sensū isn’t perfect, but with a little practice, I feel like it gave me the best results so far. 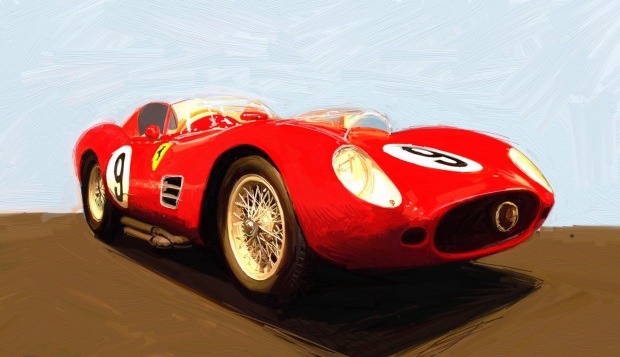 In ArtRage, and Procreate there is a little bit more lag time as I draw than I get with the Bamboo. What discovered is, the more often I saved while using ArtRage, the more the lag was reduced. I also began to appreciate that the lag slowed me down, and got me to pay better attention to what I was doing.

Another aspect of using the Sensū that I really like is the fluidity of the bristle tip. The way the stylus moves across the screen got me to loosen up, and really “paint” on screen like I was using a real brush. The bristle tip allowed me to be more gestural with brush strokes, and use my hand in a more natural way.

From an ergonomic standpoint the Sensū feels great in your hand. The weight is slightly heavier than most styluses which I actually like. It’s slightly longer allowing you to grip the stylus in a different way. The length also allows the stylus to rest across your hand between your thumb and forefinger giving you more subtle control it, and reducing fatigue, while painting or drawing for a longer period of time.

The Sensū stylus shines when it comes to things like drawing and painting. Where I still use the Bamboo stylus if for hand writing. The Sensū is capable of it, but the flexible bristle tip seems to make it hard for handwriting recognition apps to get what your actually writing out. Now with that said the the Sensū does have a rubber tip like the Bamboo, so you can use it the same way. The problem is to use the rubber tip you have to break the Sensū down, removing the cap/handle and placing it over the bristle end. This shortens the stylus length by half. I simple found it uncomfortable to use, so I switch to the Bamboo if I’m using an app like Paper or Taposé.

Overall the Sensū is a big winner in my book, and as apps like ArtRage and Procreate improve, using this stylus will only get better.

I am on a constant search for a better iPad stylus. I want something for the iPad that feels like using a stylus on a Wacom Cintiq. Since buying my first iPad I have tried at least 4 different kinds of styluses, settling in on the Wacom Bamboo, but now having seent he video for the Jot Touch, I think it might be time to switch.

At $99.00 the Jot Touch isn’t cheap, but the feature set looks like it will justify the cost. This is the first iPad stylus to offer real pressure sensitivity, and the construction of the tip allows for more precise drawing and painting. At the end of the stylus is a transparent disc centered on a small metal ball that is attached to the handle. This allows the stylus to function like your fingertip, with the precision of a pen or pencil. This is a huge benefit for anyone whose drawing or painting style needs to be a little tighter than a quick sketch. In addition to the refined tip, Jot Touch also features a number of  shortcut buttons, Bluetooth connectivity and USB recharging.

Right now the stylus pressure sensitivity and buttons are supported by a number of applications including a couple of my faves, ArtRage, Sketchbook Pro, Notes Plus, Animation Desk, and ProCreate.