Well this Sunday marks the 50th anniversary of the Super Bowl, and frankly my give a rip factor is at about zero. It’s not that I’m anti football, it’s just that I really don’t care to watch the Bronco’s play in another one. This is what, number 9 since 1977. I would say I’m going to record it to watch the commercials but the reality is why? All the commercials are now leaked online before the game, so if you really want to see them you can. No need to tune in and sit through the Super Bowl in order to catch some “million dollar thirties”.

Which brings me to this question. Have Super Bowl commercials jumped the shark?

I would have to say yes, because there is no point in forking over that kind of money, for a spot that will air once, probably be missed, not heard, or forgotten, and will only be re-aired as a cut down fifteen second spot for even more cash. The Super Bowl has marquee factor, but if your thirty or sixty second spot is supposed to make an impact, sell a good or service, and be memorable I’m thinking it has less of a chance these days. Every Super Bowl party I have been to, people are yacking it up and having a good time. When the commercial break happens, it’s hard as hell to hear it, sometimes see it,  let alone remember what it was for.

So, if you are  like me and just don’t give a damn about the game this year, but do want to see what a few million buys you in TV advertising, all the commercials are right here. Oh, and a number of these are the full 60 second extended version of the ad.

I think I’m going to go see a movie Sunday night. I’m pretty sure I’ll have the theater all to myself.

Tonight during the Super Bowl, one of the consistent advertisers will not be present. Pepsi, is forgoing paying millions of dollars to run traditional 30 second spots, in favor of the social media “Refresh campaign” they launched almost two weeks ago.Personally I think it is a brilliant move on Pepsi’s part, and I hope that it proves to be a huge success for them. If it does, this marks a turning point in the way Social Media advertising will develop over the next few years.

Last Wednesday night at “Reinvention from the Ground Up”, sponsored by Razorfish, Bonin Bough, Global Director of Digital and Social Media at PepsiCo – provided valuable insights based on the brand’s significant accomplishments – and arguable leadership position in the space.  From the decision to launch the Pepsi Refresh campaign to the Dewmocracy initiative that crowdsourced the Mountain Dew line’s new flavors, PepsiCo’s assertive moves in the social media space provided an insightful case study from a Global CPG consumer brand and icon.

Given the evolving nature of the social media space, few conclusions were reached during the panel.  But PepsiCo offered some key insights based on their experience, and on their philosophy on integrating the medium holistically within their Global marketing organization.  Some of these thought-starters included: 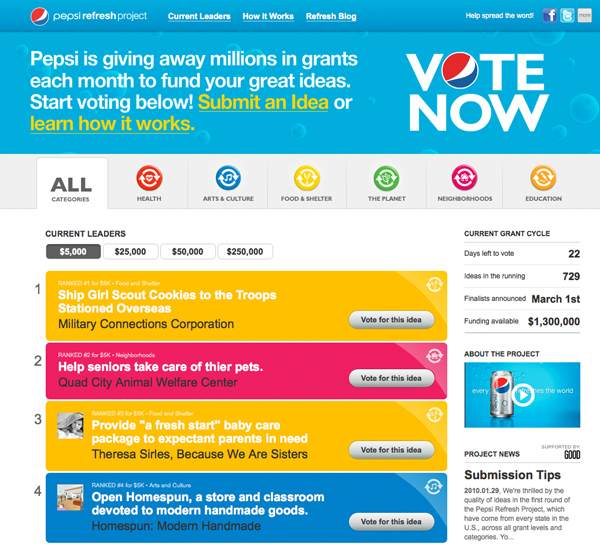