One of my biggest pet peeves are people who text and drive. I don’t care if you are rolling or stopped, if you are on your phone behind the wheel, you’re probably a menace. You’re the person weaving across lanes, not paying attention when the light turns green, stopping a length and a half behind the car in front of you, etc. Banning texting and driving is hard to enforce, just like banning talking on your phone without a hands free kit. Because it’s a hard to enforce law, the National Highway Traffic Safety Administration has launched grisly new ads combatting distracted drivers with the slogan “U Drive. U Text. U Pay.” There are two versions of the TV spot below. Both have the same brutal reality and outcome.

The NHTSA released a report this April estimating that 3,328 people were killed and 421,000 were injured in crashes caused by distracted driving in 2012. It also states that federally funded enforcement programs combined with PSAs like these, reduced the dangerous practice of texting and driving from 4.1 percent to 2.7 percent in California and from 4.5 percent to 3.0 percent in Delaware alone. April is National Distracted Driving Awareness Month. To further ram this message home, the Department of Transportation is coordinating with law enforcement for a national crackdown on cell phone use while behind the wheel from April 10-15. I hope it works.

I have zero tolerance for anyone that texts and drives, and I’m not to fond of drivers with a handset slapped next to the side of their head either. Having spent the last 9 days dealing with an auto accident that should have left my car totaled, but unfortunately won’t thanks to greed on the insurance companies behalf; I thought I would post a little something about driver safety.

AT&T has won international acclaim with the launch of “The Last Text”, road safety campaign. The campaign was awarded with a Silver Integrated Lion at Cannes International Festival of Creativity earlier this year. The campaign is built around a 10-minute documentary short that features the lives of people whose lives have been altered by texting while driving.

““Where u at.” Those three words made up the last text message Mariah West read before her car crashed into a bridge, ending her life.”” 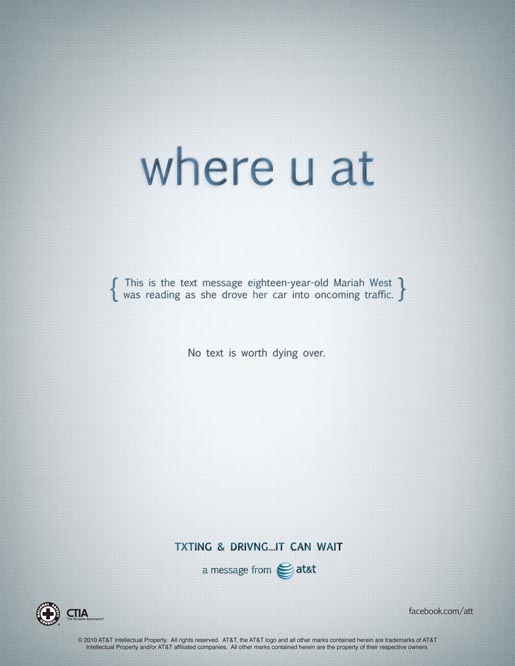 Mariah is one of eight individuals featured in the film which is distributed to schools, safety organizations, and government agencies throughout the United States. The campaign also includes print and radio advertisements, along with a series of shorted film clips available on YouTube.

The campaign was designed to help alert people to the dangers of texting & driving, and through Social Media connections, it encouraged hundreds of thousands of families to sign AT&T’s Facebook pledge. The campaign has garnered national media attention from CNN, to ABC’s Good Morning America, and The White House Blog. The documentary has had millions of hits on YouTube and, thanks to partnerships with several major safety organizations, is now included in driver’s education classes across the country.

“The Last Text” was developed at BBDO New York.