When I was 4 and a half I lost my grandfather to cancer. I don’t remember that much about the whole ordeal that seemed to last for an entire year. I have faded memories of my grandfather from before he ended up in the hospital, and I remember the hospital itself. Sitting in the lobby under the watchful eye of one of the nurses. I can still see the Green and White linoleum tiled floor, brown marble columns, the massive wooden desk the nurses sat at and the bronze ceiling clock to this day. To pass the time while my mom and grandmother were visiting him, I would look through the Sears Christmas catalog and dream about all the toys I wanted. I wasn’t allowed to go up to his room because of my age and the seriousness of his illness.

After my grandfather passed there were a few things that were given to my older brother and I. All of his fishing tackle including the most amazing green Zebco fly reel. A wooden level that he had purchased around 1920 according to my grandmother. Various odds and ends like a wooden ashtray that looked like a sombrero he had purchased in Tijuana and things I simply can’t remember. All of it is gone now except for the level. I have somehow managed to hang on to it for all these years and until recently used it from time to time. It was hard to read due to dirt and the fact the bubbles had fogged over time, but it has sentimental value and there is something about the way it was built. It’s a tank.

Late last week I bought a new gas grill that will be arriving soon and I knew I was going to need to level out the section of the patio where the grill would live. The patio tapers away from the house and I had no idea how much. I finally caved and decided to get a new 36-inch level to make sure that my handy work was going to be accurate. I jumped on Amazon and quickly saw that there are about 100 million different choices when it comes to levels. I didn’t need anything fancy, but I did want something that was solid and would stand the test of time. Something like my grandfathers trusty wooden level from the 1920s.

My level of choice was the Sands Level & Tool SL3030 Professional Cast Aluminum Level, 36-Inch level. Is it as cool as a 100-year-old wooden level? Yes and no. It’s a solid product, featuring a cast aluminum body with red lacquered edges. It looks great, and it also looks like the design hasn’t been updated since the 1960s except for the bubble assemblies which I really like. I love the fact that embossed in the casting is the company name and slogan, “Sands Levels Tell the Truth” It gives it that extra something that just completes the product for me. I also love the fact that these are made in the USA, in Witchita Kansas.

My grandfathers level is solid mahogany and brass. It is old school, it’s an antique after all. The new level is going to do just fine though. I’ll be putting it to work on Thursday when the new grill arrives and I level it out before grilling up something tasty.

Since the start of July, I have been on vacation, had my power go out for almost 3 days due to a massive thunderstorm, and been absolutely slammed with work at my job. All of this leads to fewer posts, but it isn’t like I have been posting on a regular basis anyway. Over the last year, I’ve been lucky to get a couple posts a month done. But after 8 years of doing this and 2843 posts, I think slowing down a bit is just fine. Especially since this isn’t a full-time gig.

When this blog started out, it was primarily focused on the modern house my wife and I had purchased. It was originally going to last a year and then quietly fade away into internet oblivion, but you know how things go. One thing led to another and I started going on about design and other things and here we are today. One of the first posts I did focused on the Worx battery powered lawn mower I bout for the new house. The design and functionality of a standard lawn tool and using it. With that said, I think it is appropriate that for the 8th anniversary of this blog, I talk a little bit about a new tool I picked up from Worx, that I absolutely love. The 20 Volt Switchdriver.

When I first saw this I was pretty skeptical. After reading a handful of reviews I thought I’d give it a shot. I needed a new drill, and I was completely fascinated by the design of this product, and couldn’t understand why no one had thought of this sooner. I decided to pull the trigger and pick it up from Amazon. If I didn’t like it, I’d send it back and be on my way. Suffice to say that after 3 months, I’m hooked. The Switchdriver isn’t a heavy duty drill, but for light to medium work it’s killer, and the rotating chuck is so damn cool.

If you aren’t familiar with the Switchdriver, here is the way it works. The drill has two chucks on a rotating head so you can switch between drill mode, and screw driver mode on the fly, or between different bit sizes. This actually comes in handy for drilling a pilot hole and then switching to something like a spade bit.

This 20V cordless drill comes with two 20v Lithium Ion batteries and charger, automatic LED light, electronic torque control, and the main feature, the 2-speed rotating 1/4″ hex dual-chuck drill which allows you to quickly switch between two bits. It features a comfortable ergonomic handle which has a small shield to protect your hand from the bit that isn’t in use. It’s light weight which helps with fatigue, and it has variable 2-speed gearing which tackles all common drilling & driving functions. Like I said, it’s not nearly as powerful as my corded Milwaukee drill, but it is plenty powerful enough for most common jobs around the house. 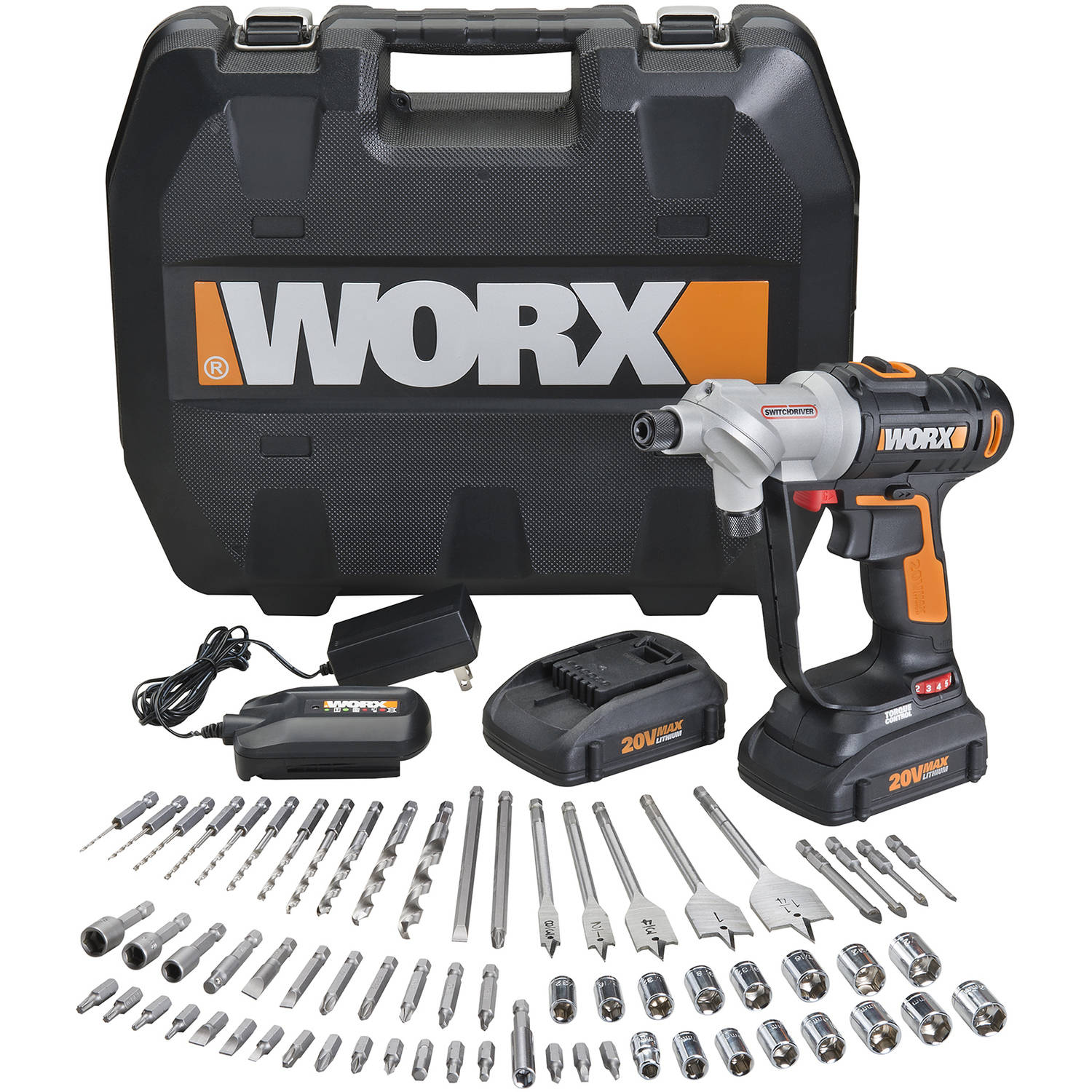 My only knock is the hex bits that you have use with the quick connect chuck. There is nothing wrong with them, you just can’t use the drill with your current drill bits so it means you have to buy a second set.

This new Kickstarter project from Dave & Calvin Laituri reminds me of my long ago days in graphic design and drafting when we used die cut templates to draw circles, ovals, arcs, curves, lines, boxes, and more. I think that nostalgia might be one of the reasons I like Tuls, but the reality is Tuls is a really nice design solution for people that need small tools which take up little space.

Tuls are a set of compact, credit card-sized tools designed to solve a range of everyday problems. Tuls are bundled in functionally complimentary sets. They are small and flat enough to fit on your keychain or in your wallet. The thinking behind them is simple. Tuls are there for you in those times when you can’t reach the tool you wish you had. Each laser cut Tul is made from 18 gauge stainless steel or titanium, about as thick and rigid as a US dime; tough, durable and built to last.